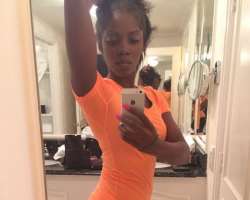 Recently, the Mavin Records first lady she shared a weight loss 'selfie' picture of her showing off her toned bod, showing she has lost few pounds working out.

“I was just about to have a burger then I remembered how hard my work out was this morning. Steamed vegetables with fish instead #fitness #weightloss #feelinggood #skinny” she said on social media.

Tiwa, who was traditionally married to her hubby and manager, Teebills over three months ago, is said to be making plans for her white wedding, which takes place on the 26th of April, 2014 in Dubai. The occasion was initially billed for February in the Maldives Island, but later changed for personal reasons.

Tiwa is signed to Sony/ATV Music Publishing and Mavin Records.