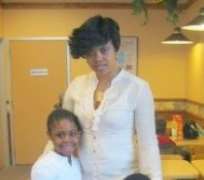 Lovely Okojie, former wife of Odianosen Okojie (Mercy Johnson's husband) in a new chat with Encomium says she has moved on after the debacle that saw the father of her two children move on with very popular actress, Mercy Johnson. Lovely who is in her early 30s maintained the episode which made her husband go for another woman is now history. She had maintained a deafening silence for long until Saturday, March 15, 2014, when she spoke with ENCOMIUM Weekly from her base in Canada.

“I have no explanation to anybody. Life is full of ups and downs. I have accepted my fate.”

How are the children doing now?

“The children are doing fine. I thank God for them.”

How have you been able to cope with the children's welfare?

But when Lovely was asked if her former husband (Odianosen Okojie) has been assisting in the children's upkeep, she got furious, insisting the man in question is in her history.

“What do you mean? That is my past. Don't ask me questions about my past. I don't want to relate with my past. In fact, I don't know what you are talking about,” and the phone went off.

However, a source close to Lovely revealed to ENCOMIUM that she (Lovely) is still very much bitter about what happened to her marriage to Prince Okojie.

“She is still bitter. She felt betrayed. She is not thinking of another marriage now, she is yet to recover from the past experience.” Lovely came to public consciousness when she raised the alarm in 2011 that the man actress Mercy Johnson was planning to marry was actually her legal husband. At this time, preparations towards the wedding was going on with the super star actress shopping for her wedding in Europe. And when everything seemed to be going smoothly, Lovely dropped the bombshell with pictures of her marriage to Okojie to back up her claim.

There was a slight setback and when many had thought the setback would truncate the marriage plans, the lovebirds, Odia Okojie and Mercy Johnson presented a united front. They were married at the Christ Embassy Church, Oregun, Lagos on Saturday, August 27, 2011, amidst tight security. The couple are now blessed with a child.

If I Listen To What People Say; I Will End Up Getting Depressed-Top Actress, Funke Akindele