Senator Ojudu: A Lamb Among Wolves 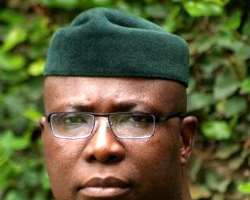 On December 13th, 2011, Senator Babafemi Ojudu while a Senator of the ACN party, read out a provoking speech in Akure during the marking of Nigerian Union of Journalists week, warning clearly about the impending fuel subsidy removal and advising Nigerian labor groups to be prepared for strike action. The senator in his must-read write-up also promised to not only challenge the fuel-subsidy removal on the floor of the Senate but assured Nigerians and the labour unions that he will march with us and protest with us.

You can find his 4,600 word powerfully written manifest on SaharaReporters of December 15th, 2011, with the caption, “Removal Of Oil Subsidy: Challenge To A Nation,” also in PMNews of December 19th, 2011. It can be recollected that on January 1st the next year, as a macabre new year's gift, President Goodluck Joanthan suddenly announced the abrupt removal of the fuel subsidy. This announcement was greeted with nationwide strikes, protests and deaths. It can be recalled that the President during the reaction to his action, confessed that a billionaire 'Cabal' he was too weak to challenge were behind the suffering and cheating of Nigerians; but this admission was after Senator Ojudu had first made the exposition, boldly describing the role of the Cabal in the fuel supply and subsidy fraud debacle, in his thoroughly prepared public notice of December 13th.

Senator Babafemi Ojudu, representing the Ekiti Central district, is not scared to pen his thoughts and give his advice to the nation on all issues of national interest and civil rights; he does not hide behind his points-of-view and does not utilize spokespersons to present important statements for him. He writes himself… he likes to write and does so elaborately, confidently and recurrently as and at all instances necessary. He gives his speeches and challenges the Senate in the interest of the masses, whether his stance is popular or not among the wolves. The Senator whose valiance and uprightness did not start this fourth republic; an exemplary Nigerian who was arrested, tortured and detained several times during the Sani Abacha—Jonathan's hero—regime, for his brave articles exposing the brutal dictator, is a lamb among the many Sheep in the Senate and the Executives. As hard as we criticize the wicked and evil rulers and lawmakers we have, so also must we praise and acknowledge those who stand up for us if and when they do.

Senator Ojudu's Bills speak for themselves. They tell of his interest in enshrining our democracy and protecting our rights. He tabled a Bill for an Act to Establish the Nigerian Political Debate Commission with responsibility for the Conduct and organization of Public debate for Candidates of Political Parties in Nigeria and another Bill for an Act to make provisions for Mandatory Compliance with and Implementation of all Legislative Resolutions and for Other Matters Connected Therewith.

There are many examples where the Senator has been one of the few or only who promptly stand up and challenge the Senate and government on matters that have pitted the Executive government and Senate of Nigeria with their coterie of billionaire greedy cabal, against the 168 million suffering masses of Nigeria. The Senator has always stood against the rapacious wolves in our interest.

In January of 2013, the Senator recommended Channels TV for national award for exposing the travails of police officers during training. The Senator said “no one could have gone to the Police College in the state it is and come out a better human being, adding that such a person would have had his psyche bastardised.” For daring to fight for an appraisal of the nation's Police, he came under fire from the Jonathan government for inadvertently “embarrassing” Jonathan.

Senator Ojudu uncovered the bribe-for-job scam perpetrated by elements in the Federal Civil Service and the Nigeria Security and Civil Defence Corps (NSCDC).

On the 2014 budget, the Senator uncovered an embarrassing major fraud. He pointed out that the budgets each year were simple photocopies of each other with no creativity… that Nigeria stopped having developmental plans in 1986. This reproduction of figures, he condemned was gross corruption and fraud practically staring Nigerians in the face. How can the same items be repeated year after year at the same staggering cost? Why should Nigeria budget over N10 billion for software for each of its ministries with the office of the Presidency budgeting as much as N580 million every year, same in 2012, same again in 2013 and the same frivolous billions budgeted for the same software again in 2014? He queried. [See: Lawmaker Uncovers Fraud In 2014 Budget, Feb 4, 2014 in Saharareporters]

Most recently, it was Senator Ojudu who raised a motion for the immediate suspension of Interior Minister Abbah Moro and the Comptroller-general of Immigrations, in the case of the deadly Immigration scam, in which precious Nigerians including pregnant ladies were martyred and millions of our unemployed were defrauded to the tune of billions by the government. The Senators muzzled Senator Ojudu who had raised the notion that all Nigerians demand—for Moro's sack/suspension—and his motion was tossed out.

This outstanding Senator has represented us in so many more ways than can possibly be highlighted in these lines. He has strongly chastised the Presidency and the PDP party for repeatedly violating Nigeria's constitutional ban of political parties instigating and promoting religious sentiments/divides. He has also clearly condemned the billions of naira-guzzling National conference which is the 11th in Nigeria's history and no different from the many of the past which served only for Presidential personal political interests. Senator Ojudu in line with the thinking and desires of many Nigerians said he will only stand for a Sovereign National conference which allows the free, sovereign discussion of all matters. He has also admitted that Nigeria needs a revolution as the status quo is deadly; and also just this week he told the world that they, the leaders were the problem of the nation.

Like Governor Rotimi Amaechi of Rivers state, Senator Ojudu does not only talk the talk, but he walks the walk and is not afraid to stand on the side of Nigerians, waging a war against the Cabal and Executive and Senate wolves and advising us honestly on what to do. Again, like Governor Amaechi, he has declared the need for a revolution, and both these men were known for their daring to take a stance against the powers of the nation, years before anything like opposition APC existed. Principle, honesty and boldness many of us fail to have. I doff my cap for Senator Ojudu. Nigeria should read him, listen to him and give him the support he needs to give us the rights and life we deserve. Senator Babafemi Ojudu is a leader.