CRITIQUE OF THE MOVIE, FINDING MERCY BY EDEH JOHN 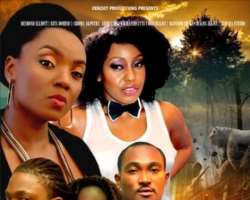 The Nigeria film industry popularly called Nollywood, is massively dominated by a group of business men with little or no artistic training. They only care about profit making from sales of VCD and DVD while neglecting the quality of the script and production techniques which makes most of their movies sub-standard. Scripts are hurriedly written in a way that the plot is massively flawed, narrow and predictable. The production quality is a huge turn-off. Though some few talented and trained professionals are making efforts to transform the industry through quality scripts and production technique, they are impeded by lack of adequate funds to fully takeover and set the pace in the standard of production. Desmond Elliot happens to be one of the professionals making such effort. Desmond Elliot is well known for his role interpretation skill. Lately, he dived into producing and directing and he is gradually climbing the ladder. Initially, I wasn't really moved to see his latest movie Finding Mercy but I got interested after the massive media hype about the film which painted it as a movie so different from the regular petty drama Nollywood churns out weekly.
The movie, Finding Mercy is star-studded and the award-winning actor, Desmond directed it; these is what arouse my curiosity and as a schooled and experienced Thespian, I chose to see the movie with a "Third eye" and I took down these note.

Synopsis;
Two friends, Jato(Blossom Chukwujekwu) and Rogers(Uti Nwanchuku) in the process of robbing a pregnant woman ended up with the baby of the woman who lost her life after giving birth to Mercy(Oyindamola Lanpedo). Jato decides to raise Mercy against the wish of Rogers. Several situation transpired as Jato finds himself working in an environment with charming ladies like Rita Dominic and Daniel Olatunji(Desmond Elliot) as the CEO. After Rogers and Jato backstabbed each other by revealing to Rita about their each other's past, she out of jealousy squeals the secret about Mercy's puzzle to Olatunji who is her biological father. Olatunji is bent on taking back his child while Jato insists on keeping Mercy. In the course of this critique I will be analysing the (1) Set design/costume and make-up (2) Script/Plot development (3) Casting, Acting and Directing (4) Cinematography and Editing (5) Music and sound effect (6) Product Placement (7) Literary devices.

(1) Set design, costume and make-up.
The set designer delivered his department perfectly. From the character's home to the office scenes. Though most of the scenes are interior, the set reflected the situation and status of the characters.
The costume designer sure guided the actors in their choice of costumes. The well-tailored, brightly-colored and contemporary outfits defined the status and characterisation of the characters. But the costumier got it wrong in one scene: Betty in her first day at work as Rita Dominic's assistant, she wore a micro mini skirt in a corporate environment. Damn! That is not obtainable in any corporate environment anywhere in Nigeria; talk more of a Public relations firm.
Most of the make-Up pattern in the movie is straight makeup, requiring no special expertise. I'm sure the artist enjoyed doing it perfectly, though the artist couldn't deliver in making Mr. Olatunji's thick beards. The beards looks so plasted and artificial. I would have recommended that since Desmond is a hairy man, he should have desisted from shaving at least for four weeks prior to shooting those scenes. The image they wanted to create would have being natural.
(2) Script/plot development.
Like the media hype painted, the storyline of the movie went a notch higher than the regular and petty drama from Alaba intl. Market but it could still have been better with deeper creativity from the writer and thorough script scrutiny. A script is indeed the bedrock of any film and the scriptwriter( Kehinde Odukoya) did a good job with Finding Mercy but he could have done better.
IRREGULARITIES.
(A). In the scene were Jato wrongly parked his SUV with the baby (Mercy) inside. The Police accosted him, saw the few-days old baby; they were about arresting Jato before he started crying( He couldn't even cry and it wasn't convincing) that he lost his wife during the child delivery and the Police took pity on him and let him go. This is ludicrous, it is not possible to fool a Nigeria Police officer(despite their stupidity) with such a fake cry especially where they find a young man(like Jato) with days-old infant without a mother. The writer and the director attempted to fool the audience by that. It is either the writer or the director thought he could create a scene to heighten the audience's mood. The scene does not advance nor add artistic value to the story.
(B) In the scene where Jato brought the baby into his house, he and Rogers were arguing before Jato's mother came visiting. Jato hide Mercy behind some frames in the parlour when his mother entered the parlour. Why didn't he take the baby to his bedroom if actually he wanted to hide the baby as we were made to believe? The baby was "hidden" in the parlour deliberately so that Jato's mother can discover her without effort. And when Jato's mother heard the baby's cry, she kept straining her ear as if the cry was coming from a far distance only to turn and see the baby behind her; that wasn't a right direction. Worst still, when Jato's mother saw the baby crying seriously, she kept talking and questioning the boys instead of carrying the baby. Any woman, no matter how talkative she is would carry the crying infant from that unpleasant corner immediately before asking further questions. Wrong direction.
(C) The baby's mother was fair-complexioned, when Mercy transformed to a 10 year-old girl; she become dark-skinned. They may say the father, Olatunji is dark-complexioned but Mercy was very fair when she was six months old, how come she suddenly turned very dark when we saw "Ten Years Later? Or was she bleaching at infancy or got over-exposed to the sun at ten? Casting director and the producer obviously made a big error.
(D) The movie introduced Rogers as a criminal but why did he go to jail for eight years? The scriptwriter obviously thought the audience do not deserve to know and the director unthinkably failed to spot the omission so he could use his discretion and creative acumen to improvise a scene or any dialogue that would have blinded that error. That was a big mistake because the eight-year jail issue happens to be the dialogue that propelled the story from the 97th minute into other discoveries and denouement.

3. Casting, Acting and Direction. The casting director did a perfect job in casting the Actors to the characters. Mixing of new faces with established acts. The casting of Blossom Chukwujekwu as the Leading Man(Jato) was indeed daring, taking into cognisance that his face would not generate much commercial hit but he is surrounded by stars who could guarantee any movie(with good script) a box office success. The only mistake in the casting was Mercy: being fair at infancy then suddenly turning dark at age ten. Every detail of a film is very important as it can be spotted by any curious and critical eye. Acting.

BLOSSOM CHUKWUJEKWU:
Though not a popular face yet, he performed averagely. He wasn't audible enough until far into the movie. He also couldn't cry to convince even blind men. The director could have ensured he performed better or adopted another option to achieve that. (A kick on his balls or a friendly slap on his eyes could have worked)

RITA DOMINIC:
Rita was in her comfort zone so wasn't really proving any point about her skills. I was jolted but fascinated by the mannerism she exhibits when ever she is very tense. Superb delivery all through especially in the last scene in Jato's house.

UTI NWACHUKWU.
Uti is normally loud in most movies. He didn't change in Finding Mercy too. Above all, he interpreted his character perfectly most times flooring the Lead but Rita kept overshadowing his act when ever they play in a scene especially the scene where he stopped by on the road to give Rita a lift, He sure didn't get it right there as I saw confusion in his delivery. Having said that, Uti delivered well.

DESMOND ELLIOT.
Desmond's performance and acting skills is never in doubt as he brought same but more restrained delivery to bear on his role, Daniel Olatunji which is perfect. Though the make-up artist couldn't transform his facial looks to match the receding hairline so as to depict the aging character they tried to develop.

Art direction.
Desmond Elliot is an accomplished actor and trying to make his mark in directing. Having seen some of his other movies, Finding Mercy is a far improvement as he seems to be learning the craft rapidly. Though some lapse could still be seen in the movie which I have pointed out in most of the sections in this discuss. The art direction is above average, with a better screenwriter he would do better.

4. Lighting, cinematography and editing.
The lighting is satisfactory as it brought more beauty and ambience to each scenery and accentuates the mood and time.

The cinematographer must take more credit than any of the crew members. From the camera angles to shots selection and effects, the DOP captured images that are comparable to top pictures in the world. From the establishment shots to the night scenes, they were all framed and captured perfectly thereby giving the movie a highly technical delivery as compared to other Nollywood movies made in 2013(that I have seen).

The editor delivered a masterpiece as all the scenes flowed smoothly into each other without delays and 'noisy' cuts. 5. Music and sound effect. This is one aspect of the movie that didn't fail to live up to expectation. The music score and sound effect fits each atmosphere and situation and this helped to define the actions, dailogue and mood of the various scenes.

6. The product placement left much to be desired of. I understand the need to promote a product of the brand that supports a movie but the scene where that was done seem unscripted and poorly created as the scene didn't contribute to the storyline.

7. between suspense and dramatic irony.
Just like the regular Nollywood movie, the writer utilized more of dramatic irony as the audience are in the know and can predict outcomes of most situations while the characters are in the dark. The movie sacrificed the use of suspense for dramatic irony, which is not advisable for a drama. If only one of the literary device must be deployed, suspense must have the upper hand so as to keep the viewing audience hungry for the outcome; but this is a general shortcoming with most Nollywood movies.

Generally, I would rate Finding Mercy as achieving more core-technical and acting success than the art direction and scripting which if gotten almost-perfect would have made the movie a masterpiece in Nollywood. The errors in the scripting impeded the entire movie of achieving a four-star rating by me. This again buttresses Nicholas Sparks assertion that "Making a movie is all about the script, the script and the script" and Harold Ramis assertion that "I always claim that the writer has done 90 percent of the director's work"