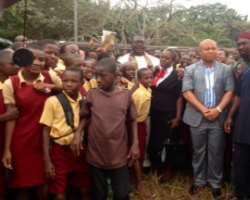 That song raised by His Excellency, Deputy Governor of Imo State, Prince Eze Madumere who was overjoyed that his children were back to school was sung by the happy and ever ready to sing members of the community for it was a song of miracle indeed. That song rendered in Igbo language means Our God is good, the creator of the universe, the creator of all men, our creator, the one who was never created... He is good, he is wonderful and a miracle working God.

Lagwaukwuato, a once peaceful agrarian community known for its revered tradition of palm wine tapping in Mbaise Nation before now was known for her hospitable niceties among one another and her visitors. Natural are its serenity, sanity though with some rustic life but could be said to be in lack of great traders traders and leaders of thought and learned personalities. It was not until 1999 when the people were plunged into Ezeship tussle over their resistance against overlord and self imposition. Since then peace seemed to have eluded this one time community of peace.

From those who spoke praying for non disclosure of their names, they said the man in question terrorizing their community is linked to Imo based Abuja politicians who have had to rely on the said feudal persona for their electoral proceeds with his termed hoodlums. The said ballot box carrying gangs are said to be shielded from arrest by the Abuja based politicians.

It was revealed that Rescue Mission Government of Owelle Rochas Okorocha has made frantic effort to solving the puzzle to the extent that the said assailant against the community was suspended while the matter over his true status is being investigated. This has actually fallen on deaf ear as the man in question continues in his impunity while still acting as de-facto Warrant Ruler of Mbaise Nation.

The last of this rape against the people of Lagwaukwuato was the declaration of a Public Holiday by the said self crowned Eze for which the Principal of the School, Mrs. Egwuatu Adanma allegedly questioned the authority to so do. Our impeccable source opined that was at that point that the ruler of the community let out his human trained dogs to pounce on the principal. For fear of their lives, the one time lively school was left deserted as everyone scampered for safety. Parents fearing for the lives of their children stopped them from going to that school coupled with an order from the said Eze of Lagwa Community. And the school remained shut since November 15, 2013.

It was until recently the history was made as Community Secondary School Lagwa was not only reopened but numerous Imo Children who had been shut out of school since November 15, 2014 resumed back to school.

It was said that Imo Deputy Governor had elected to lead the emissaries of peace when the matter was brought to the floor during Security Council Meeting, after Governor Okorocha had expressed worries over the development.

While addressing the mammoth crowd at the occasion, Prince Madumere said he visited the said school in Lagwa Community in Aboh Mbaise Local Government about a week ago. He called on the leaders of the community and the entire people of good conscience from entire Lagwa Community and Aboh Mbaise in general. His case was that whatever it was, the peaceful coexistence of the people and the future of the children were more important that ephemeral issues that have little or no connection to the future of the community, Aboh Mbaise and Imo State in general.

Imo Deputy Governor wondered why a people should decide to inflict such an eternal injury by the community by agreeing to put the children out of school even when Governor Owelle Rochas Okorocha has made education free including uniform, shoes and other materials. He wondered whether those behind the dastardly act are aware of the consequences of their action and the consequent negative impact it would have on their children and their future.

He revealed that the largesse, which the Governor of Imo State, Owelle Rochas Okorocha has been given to other schools is yet to reach the children becaus ethenscholl was not in session.He promised the children to expect their materials in their various schools in two weeks as he directed the Commissioner for Education to so carry out.

However, Imo Deputy Governor said the event is very symbolic for him. He called on the people to always stand for the truth and nothing but the truth. "You would not go wrong to defend what is right be it a fight against impunity, a fight for preservation of your right, a fight to defend democracy. The matter was raised at the security council meeting. I elected to go and see myself. I promised to work with the stakeholders and leaders of thought from the community for re- opening of the school. The crises ought have been prevented if there were an interface between the school management and the community. I believe we have learnt our lessons and that never again shall we toil with the future of our children", he enthused.

The students who were affected by the incident could not hide their feelings. Speaking with young Chineze Okereke, A Junior Secondary Student of the said school, in his words; I am very happy that we are back to school. Help me great our Daddy, Governor Okorocha, tell him we love him. I was tired of staying at home and my parents cannot afford to put me in private school. Today, I am back to school. I am every very happy. I thank our Deputy, what they did is 'sharp'.

For Onochirionye Chibueze, she was seen singing and jumping tirelessly while the song was going on... She simply said I am happy to come back to school. Everyday you wake up and see your friends dress up and you will be looking at them. I thank God that our Governor, Owelle, Deputy and Commissioner have opened our school again.

Mrs. Egwuatu Adanma, the principal of the school could not help betraying a mind full of joy as she busted into tears of joy. She could not say much than appreciated the the Governor of Imo State, Owelle Rochas Okorocha and his Deputy whose love of peace has been his trade mark. She further called on the community to know the no go areas when it comes to local politics.

Special Adviser, Inter Party Affairs, Chief Alan B. Onyemaechi, called on the people to realize that Owelle Rochas Okorocha government is for the poor while extolling the virtue of humility of Imo Deputy Governor, Prince Eze Madumere. He said the government has demonstrated in many ways that it is for the down trodden saying if it were in the past, having a person of a Deputy Governor coming so low to a community for an issue considered to have no electoral value. He called on the people protect that, which is theirs by supporting the government of Owelle Rochas Okorocha.

Barrister Aliribe Iheukwumere, Commissioner for Transport said he has never seen a thing like this. He averred that Owelle Rochas Okorocha administration is for the poor and would always be own the side of the poor. He recounted Imo Governor's fate with the poor even before he became the Governor of Imo State. He also called on the people to stop hiding as

Commissioner for Education, Dr. Uche Ejiogu in speech promised the students to make available all that is he needed to aid study while assuming the of roving all that thy need for their silence laboratory while assuring them of getting their furniture, school uniforms and other school materials already provided by Imo State Government.

However, like Imo Deputy Governor promised that the State government will wade into the core issue that led to the closure of the school, it will be the wish of every average Lagwa indigenes for peace to be returned while people no longer walk and talk with fear of molestation or attack from attack from the warring camps.