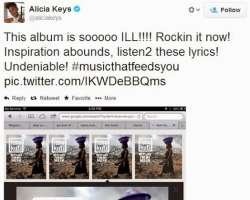 Alicia Augello Cook, known professionally as Alicia Keys, is an American R&B singer-songwriter, pianist, musician, record producer, and actress,and is one of the few foreign artistes who have begun to appreciate African music especially Nigerian songs.

Recently, Alicia Keys hipped praises on the song of Afro-beat Legend, Femi Kuti, titled 'No Place for my Dream,' stating that the song gives her inspiration.

It would be recalled that the Nigerian music legend was nominated for the 56th Annual Grammy Awards with 3 other artistes.
He lost out to French group Gipsy Kings and South African group Ladysmith Black Mambazo. It was a tie.

Though the son of the late Afro Beat legend Fela Kuti, has been nominated severally for the Grammys but has never won it before, but his music continues to receive accolades from both local and international audience.

Femi Kuti who has grown less optimistic about getting a Grammy Award did not attend the awards show. He was represented by elder sister Yeni Kuti.

In 2003, Kuti picked up his first Grammy Award nomination but lost out to Panamanian salsa singer Rubén Blades. He similarly lost in 2010 when he was nominated in the same category. US banjo player Bela Fleck walked away with the award.

In 2011, Kuti once again lost the award to Malian band Tinariwen for the album Tassili.

Meanwhile, throughout her career, Keys has won numerous awards and has sold over 75 million records worldwide. Also, she became the first female to have an MTV Unplugged album to debut at number one and the highest since Nirvana in 1994.