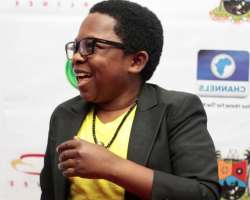 Many times people despise people that are different from the normal people we are used to seeing and they feel they are nobody for the case of popular Nollywood actor, Chinedu Ikedieze popularly known as Aki who got conferred with the MFR title by President Jonathan in July 2010 , it is a gift from God and he appreciates the way he is very much.

He made it clear in a recent interview that the national title MFR which was given by the president does not come with any visible benefits to him. Aki in a chat with Yes! magazine this week said there is no monetary value or special benefits to the title as obtained in western countries. "The only joy in it is the recognition.

When I am traveling and I get to the Airport, I get special preference and recognition. Apart from that, I don't get any other thing. I don't get paid, I don't get any special benefits as an MFR. As an MFR, I hold the same position with some of those who are Members of the British Empire (MBE) and they have some special benefits in the international community and honourary recognitions but those things are not here" he said. Aki was also asked if he ever wonders why he was created in the form he is. "Am I the one that created myself? Why would I ask myself such a question? You can only ask such a question when you are frustrated about life or if you are tired of life.

But in my own case I am not. When you wake up in the morning and you have something to eat, you have people who can smile at you and you smile back as well, then what else do you need? Then you go to bed, you sleep and you seldom go to the hospital, so which other gift is more important than that?

As far as I am concerned, that is the greatest gift. There are some people who have all the money, cars, houses and all the things they want, but they are sick. They don't enjoy the money. So the perfect gift for me is good health"