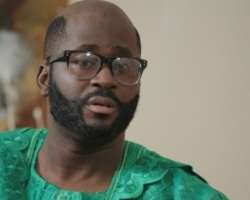 There has been news going around lately about Top Nollywood actor/Producer, Desmond Elliot who has add an additional awards to his numerous awards, he won the Best Supporting Actor award at the 2014 AMVCA, according to reports he wants to quit acting for politics, the actor has reacted to the report that has been making rounds. The actor has confirmed his desire for a political post in 2015 he said that will not stop him from acting.
The happily married father who has definitely paid his dues as been acting for close to 12 years said 'I'm not quitting acting but if they say I said so, I don't know about that.'