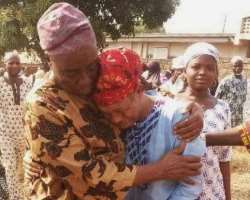 Reports just reaching Nollywoodgists.com has it that Comic actor and MTN ambassador, Hafiz Oyetoro, popularly known as Saka, has lost valuables worth millions of naira to an inferno that razed his office located at Adeniran Ogunsanya College of Education, last night.

According to Saka's Personal Assistant, the cause of the fire could not be ascertained as his Boss valuables were all gone down the drain.

It could be recalled that the comic actor recently had an elaborate 40th day Fidau prayer and burial party for his late father, Alhaji Oyetoro at his home town, Iseyin, few weeks ago