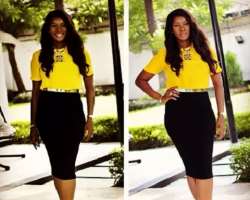 Popular actress, Stephanie Okereke-Linus has started to shoot parts of her new television show called 'Make Me Fabulous'. The programme is targeted at couples and lovers.

According to the actress, the daily activities of most partners are always enormous, which leaves them with little or no time for each other, let alone having a romantic time together.

Female winners would emerge from the TV show and would be pampered and 'transformed' for her husband/boyfriend. Stephanie hopes this would bring excitement to the programme and the ladies' partners.