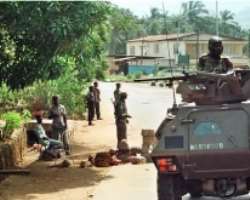 http://thewillnigeria.
com/news/wp-content/uploads/2013/12/NIG-MILITARY.
png
&
&
&
&
&
As Shettima Sets Up Emergency Relief Committee
The military on Saturday killed no fewer than 100 Boko Haram gunmen in yet another bid to overrun an army barrack in Maiduguri, the Borno State capital.

It was the second major routing of the insurgents in two consecutive days following Friday's bloody clash which left no fewer than 350 of the Boko Haram fighters dead when they attempted to storm the 21 Armoured Brigade (Giwa Barrack)  in the Borno State capital.

THEWILL gathered that gun shots and explosions rocked the town causing further apprehension among residents, many of whom had to flee the affected areas immediately for safety.

A security source told THEWILL that the insurgents were seen from a distance trying to attack the barrack again at about 8:30am but 'we immediately moved against them and were able to dispense with all of them.

'
He disclosed that the military had to embark on both land and air raids to send the insurgents back during which no fewer than 100 of the insurgents were killed.

However in what appeared as a retaliatory action, the gunmen killed over 20 persons along the Maiduguri/Biu highway and destroyed several properties.

A passenger along the Biu-Maiduguri highway on Saturday afternoon said traffic was held up for several hours as commuters panicked.

'Just few hours from Biu, we saw people making a U-turn and we had to join since they were shouting that Boko Haram was on the highway,' he said.

Meanwhile, Borno State Government has established a Special Emergency Relief Committee to bring succour to the victims of the attack and build a temporary refugee camp.

In a statement issued by the spokesman for Governor Kashim Shettima, Alhaji Isa Gusau, the committee is to immediately 'open a temporary camp to document and shelter victims displaced in Maiduguri as well as those victims displaced in the surrounding communities who have entered into the State Capital.

'The committee is to provide necessary relief to all the victims and to implement suggested ways by which the victims can be assisted to return to normal life.

The committee is to be chaired by elder statesman Bulama Mali Gubio while the Special Adviser Research, Documentation and Strategy, Dr Mohammed Bulama is to serve as secretary.

Shettima also directed the committee to meet the State Deputy Governor, Zannah Umar Mustapha on Sunday for further briefing on their assignment and conclude modalities for take off.

He also instructed all Care-Taker Committees' Chairmen of the 27 Local Government Areas to establish Standing Emergency Relief and Response Committees in their councils.

'In doing so, they should take cognizance of relevant stakeholders like traditional rulers, community leaders, security agencies, youth volunteers and the health department.

The major responsibilities of these committees shall be to liaise and collaborate with security agencies, community leaders and other stakeholders to proactively gather and provide intelligence to relevant authorities with a view to prevent insurgent attacks, to assist in the provision of protection to communities as well as provide emergency relief,' he said.

Shettima, who sent his condolences to the families of the victims of the attacks, maintained that the State Government was taking every lawful step available to protect lives and property.

Shettima said, 'it was part of Government's urgent need to seek solutions to the crisis that necessitated his current trip out of the country with the sole aim of expressing the concerns of Borno State and holding discussions with international experts and concerned governments who have shown empathy and commitment in helping to address the problem by way of complimenting the sustained efforts of the Federal Government.