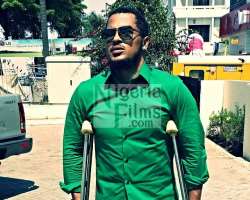 Van Vicker was part of the eleven players who played for Ghana against Nigerian actors on the independence day at the Kumasi Sports Stadium. Unfortunately for him, he had to be substituted after ten minutes into the game. He got injured so had to rest for others to get the chance to play.

in a chat with his PR Mustapha Inusah AKA Attractive , he revealed to NigeriaFilms.Com that the actor is currently under-going treatment at sunshine Hospital but hope and pray he will get well soon.

Some of the known faces in Nigerians team were Segun Arinze, Sopiriye Fiberesima, Chigozie Atuanya and Hanks Anuku.