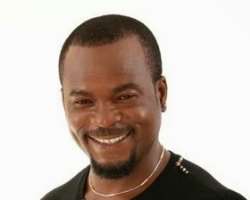 Nollywood actor, Emma Ehumadu is a very lucky man!..he almost lost his life while filming an armed robbery scene at a movie location in Asaba, Delta state on Wednesday, March 12th.The accident occurred around 2pm. At the time, Emma Ehumadu and Zubby Michael were in a car, which was being driven by Jim Iyke.

Unfortunately, the brakes of the car failed, and during Jim Iyke's attempt to avoid hitting bystanders, Emma Ehumadu was hit on the head by the open door of a stationary vehicle. Jim Iyke immediately drove the injured actor to the hospital, while Zubby Michael administered first aid to him.