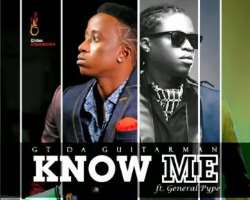 Singer, songwriter and guitarist, Gbemiro Tokunbo aka Gt Da Guitarman, has identified his delay in his album release due to financial constraints.

Speaking with Nollywoodgists.com on his recent released single, 'Know me ft General Pype,' Gt, has related poor development of Nigerian artistes to the media and lack of good structure in the industry.

He stated that the industry is just like Nigeria with a one party state whereby only a political party is ruling and as such, that is how the industry is.

'it is only those that have strong financial backing, that will be able to push himself out.'

According to GT, everybody just want to dance, nobody wants to listen to good lyrical contents because it is what the media push. 'The media to some extent is corrupt.The media would rather push artiste who have paid for PR, than those with raw talent,' he added.

Furthermore, he also lashed the marketing aspect of songs, which he term as being 'aggressive and can be manipulated. Anybody can become a star if you have money to bribe your way.'

Meanwhile, the tenor guitarist who is the CEO of Ember Entertainment, has promised his fans an admirable year as he is planing on releasing his album this year.