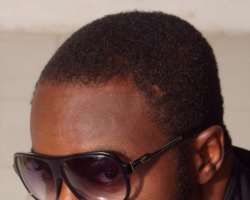 If the current news pervading the air happens to be anything to go by, then Imo State's born Highlife/Bongo music producer, Engr. Bruno Chigozie Iroanya is right at the edge of hitting it big this time.

Known as Magic Finger in the Highlife music circle, we could be informed that he just returned from God's own country, United States of America and now would be returning to seal up opened and unfinished deals abroad.

Confirming this report, the multiple award winning producer said: 'It was actually my first trip there, and I must tell you that the experience was awesome for me. I felt humbled seeing people appreciating our craft and music'.

'Because of the high level of acceptance we got from them, especially Diasporas, I was able to startup some consultation, recording and production deals with the blacks and whites there. Not only that, I also got good endorsements from recording labels which I will be going back to finalize,' he enthused.

In a related development, he debunked the news making round that he released an album into the market. In his words: 'It is a total fallacy receiving the news that I now sing. Even, I got a report that a guy is parading himself as Bruno; and that's not me.

'Last year, I released a Bongo jazz, and soon I will unveil its second. For me being a musician, it will mean me venturing into gospel; for now I'm just a producer'.