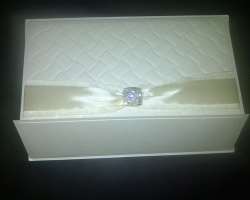 The traditional wedding of Paul Okoye and his fiancée Anita Isama will hold in Port Harcourt on Saturday, March 22, 2014.

The couple got engaged in September 2013 after welcoming their first child, Andre, four months earlier. There have been earlier reports that the P-Square brothers will throw a combo wedding in April, but insiders are now saying this will unlikely happen..

The would-be couple has already started the distribution of their elegantly designed invitation cards to guests.

The wedding will hold at the Aztech Arcum at 12 noon. The invitation card also reveals that the traditional wedding will be a Teal and Coral affair.