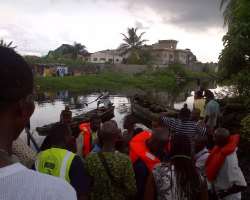 According to the National Emergency Management Agency NEMA, about Fourteen bodies have been recovered after a boat capsized at about 11 p.m. Tuesday at Festac Town, Lagos.

A distress call was sent to the Navy and the National Emergency management Agency asking for rescue. NEMA sources told reporters that some bodies have been recovered so far.

The boat carrying 15 passengers reportedly capsized opposite 41 Road in Festac around 11: 30 PM. Recovered corpses include 12 men, one woman, and a girl.

The search and rescue operations continue.