'I Am Not In Any Relationship’--MBGN Queen, Anne Banner Says 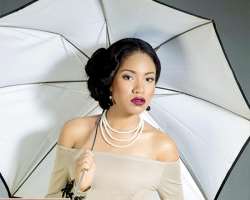 Following recent speculations going round the blogospheres, the reigning MBGN queen & Special Assistant to Henry Seriake Dickson on Culture and Tourism, Anne Banner, in Bayelsa State, fuelled speculations she was engaged when she shared a photo of a ring on her finger with caption

The MBGN Queen, has cleared the air that the guy who gave her the ring was just a friend, and she is not in any relationship for now with any guy.

According to her, she said the guy who gave her the ring was just a friend and not her not my boyfriend, who is like a godfather, an elderly white man. Adding that It was like 3-days before Valentine.

Anne added that the gift came alongside her birthday and valentine which was around the corner.

'I was very excited because that was my first diamond ring. He even gave me the certificate for the rings. So, right there, in his house, I posted it on Instagram. But I didn't add anything like 'my boo gave it to me,' she added.