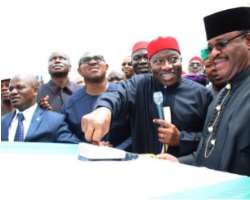 President Goodluck Jonathan, on March 10, 2014, laid the foundation stone for the construction of second Niger Bridge linking Asaba in Delta State with Onitsha in Anambra State, as the project is to be constructed by Julius Berger Plc.

Also present at the event were Governors Peter Obi of Anambra, Emmanuel Uduaghan of Delta, Theodore Orji of Abia and Martin Elechi of Ebonyi States as well as ministers and members of the National Assembly.

Speaking at the ceremony, Mr President disclosed that the second Niger Bridge was critical to his administration's resolve to improve the economic fortunes of the country, describing it as a fulfillment of one of his campaign promises.

He said: 'It is my resolve and that of my administration to ensure that this unity bridge is built to connect Asaba and Onitsha. I want to urge the governors of Anambra and Delta states to ensure that the project is built on time and according to specification.'

Also speaking at the ceremony, the Minister for Works, Mr. Mike Onolemenen, said the project, as part of the transformation agenda of Mr. President, was to improve the infrastructural and socio-economic activities of the nation.

According to him, the construction will be completed within 48 months.

Also speaking, chairman of South East Governors' Forum and Governor of Abia State, Chief Theodore Orji, said that with the latest development, President Jonathan had shown that the South East was of great importance in the Nigerian project.

Orji observed that the bridge, which will serve as a gate-way to the southern part of Nigeria, would also boost economic activities of the people and solve the problem of loss of man-hours being spent on the existing Niger Bridge which often experienced excruciating traffic.