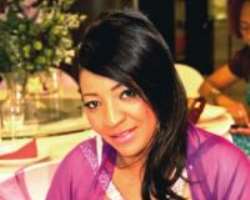 At a time when Nigeria's bubbly movie industry was picking up for what it has become today, several of its pioneers left the terrain. One of such is Rita Nzelu, who 'disappeared' almost a decade ago.

Nzelu was one of the popular actresses in those days, giving people the impression that she would be around for a while. It however came as surprise to many when she was no longer appearing in movies on a regular basis and nobody knew where she was.

But unlike some others, who left the industry in search of the proverbial Golden Fleece, Nzelu, who left for the United Kingdom, says hers was to raise a family.

Nzelu, who notes that she also runs a beauty salon in London, is returning to the industry that brought her fame, this time, not just as an actress but a movie producer. The actress, who is ecstatic about her new movie, International Games, says she is happy to be back.