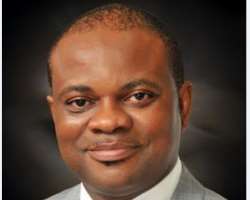 Rivers state frontline Governorship aspirant, and Leader, Rivers Converge; a network of political alliances of Rivers people, residents and friends of Rivers State, Hon. Nimi Walson Jack has said equality for women in Rivers State and Nigeria can be achieved on the adoption and implementation of a policy of affirmative action of positive discrimination in favour of women.

Jack made this call during the 2014 commemoration the International Women's Day. According to him, our women have come of age, which is evident in all the facets of national life, adding that we see steady increase in the contribution of women in business, education, the professions and of course in their efforts to be better equipped to contribute to nation building.

In a full address made available it reads: “We support the global call for equality for women across all spheres of human endeavour. Despite the fact that the Constitution, our laws and international conventions outlaw gender discrimination, society still subjugates and denies women their rights. Cultural and religious practices and the politics of gender exclusion further militate against the attainment of gender equality. The 35% affirmative action for women in itself is a derogation of the Constitution, which prohibits gender inequality. Laws alone, therefore, are not sufficient to address the issues of inequality. Deliberate commitments by all, especially policy makers and drivers are required to bring about the desired change.

The responsibility for change in promoting gender equality rests on men since it is in their minds that inequality is conceived. It is imperative that men must take greater responsibility in championing the cause of gender equality and by so doing promote progress for all. The fact that women are in the majority in Nigeria makes it imperative to work in partnership with them for our society to make progress; hence our advocacy for positive discrimination in favour of women on the basis of merit across all spheres of human endeavours. This would end the inequality in our own society and open up opportunities for all. The point must also be made that equality with women neither derogates from the rights of men nor degrades their status; but enhances it.

Empirical studies have shown that the apparent lack of progress and under-development of the 3rd world may be directly linked to gender inequality in the formulation and implementation of policies and in the running of government.

Immense benefits are accruable to our society when the principles of gender equity and equality are promoted. For instance, education of women leads to their empowerment and overall wellbeing. According to scientific findings, the education of women has a direct link to the improvement of their health and those of children.

Providing women with opportunities to work also improves the income of the family, promotes stability of our society improves the quality of the workforce given their dedication to work. To deprive women of formal education, therefore, deprives society of the laudable inputs they can make to advance society.

Encouraging adequate and effective representation of women in politics and government will lead to the direct fulfilment and show a true reflection of the desires of the people. In other societies, this has led to an increase in political and social achievements.

Education remains a vital solution. Society also requires fundamental orientation and re-orientation, especially of the men, to prepare their minds to accept women as being competent enough to take leading roles in society. Women who are beneficiaries of the struggle for women equality either through appointments or elections into positions of authority should also endeavour to use such positions to advance the cause of gender equality, rather than undermine it”.