Damilola Adegbite Believed To Be Pregnant 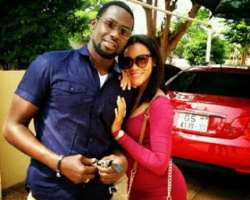 Sultry actress, Damilola Adegbite could be pregnant if rumours making the rounds in town are to be believed.

This perception is backed by the amour that has been existing between Damilola and her soon- to-be husband, Ghana's
Chris Attoh.

It would be recalled that a couple of days ago, the love birds publicly announced their upcoming marriage which is slated for April.

A school of thought is of the opinion that Damilola's purported pregnancy is true owing to her 'scarcity' in the public domain for quite some time now. Sources say it is as old as six months already – which definitely means a 'protruded' tummy.

Another school of thought argue that it is in the nature of celebrities – at least in this part of the world – to have their pregnancies shrouded in secrecy until latter months when it becomes so obvious.

Moreover, could it be the pregnancy was accidental thereby forcing both of them to reach a marriage consensus? In any case, time will tell if Damilola is pregnant as being touted. For now, we put our 'congratulations' on hold.