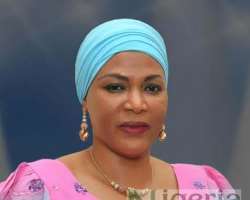 There's no doubt that, corruption and ethical misconducts have eaten deep into the Nigeria's judicial system despite spirited efforts by the National Judicial Council to rid the noble profession of fraudulent officers.

Just yesterday, the body, NJC slammed two judges, Justice Gladys Olotu of the Abuja Federal High Court and Justice U. A. Inyang of the Federal Capital Territory High Court for gross misconduct, pending the approval of their dismissal by President Goodluck Jonathan.

And in less than 24 hours, another fraudulent practice has been uncovered by yet a respectable Abuja Court Judge, Justice Danlami Senchi who has been alleged severally of gross misconducts and presently running from pillar to post to sweep a petition written against her and which is rubbing off on her person under the carpet.

You would recalled that an Abuja based multimillionaire businesswoman, Hajiya Habiba Abubakar Abdullahi recently reported a case of land fraud against Justice Danlami Senchi who's being alleged to have sold a dummy and swindled her of her hard earned money, a whopping N60million by putting her reputation as a high court judge to seal the deal.

The case has been so hot that it caught the attention of the National Judicial Council which issued a query to the Abuja based judge, Justice D.Z. Senchi asking him to explain within three weeks his role in the shady land deals.

The query, we gathered was personally signed by the Chief Justice of Nigeria and Chairman, National Judicial Council, Justice Aloma Mariam Mukhtar with Ref. No. NJC/F.4/HC.25/1/231 and dated 4th December, 2013.

In a face saving attempt, the embattled judge, Danlami Senchi recently made up a letter purported to have emanated from the office of the Chief Justice of Nigeria, Justice Aloma Mariam Mukhtar to shut up his petitioner, Ambassador Habiba Abubakar and her lawyer, Ayuba Abdul.

The said letter which was signed by one Danladi Halilu who claimed to be the CJN's Secretary is vindicating the high court judge, Justice Danlami Senchi of involving in the land fraud but the brilliant lawyer who received the letter has sighted some discrepancies in its contents.

This is not possible as such grave mistake can never be made from the CJN office. If the letter is truly and genuinely from the CJN's office, how on earth would her secretary be missing such vital reference, as in the number of the case they earlier replied to.

Another flaw is the purported letter head paper with which the letter was written, a close look at the logo of the presumed CJNs Office sub headed paper, OFFICE is spelt like this ( FFICE ) OF THE SECRETARY, all this inconsistencies do not look like the letter originates from her office and with her knowledge.
.
Instead of replying the query given to her by the NJC, this is what the high court judge has decided to do to pervert justice but we're sure the NJC is a disciplinary body aimed at checkmating bad judicial officers who engage in act unbecoming of a good judge and we shall do nothing but follow this to the end, Ayuba Abdul, Amb. Habiba's counsel vowed

“The office has queried the Judge and has been mandated to reply within three weeks, his involvement in the N60m fraudulent land deal, what is the position of the NJC vis-a-viz his reply? We hereby call on the NJC/ CJN to investigate the said letter that is supposedly sent out by her Secretary with all those blunders. So that Danladi Halilu Esq (Secretary) or any other person does not put the NJC and CJN's office credibility at stake and also put the office to ridicule, after all they've been doing to clean the system and eradicate the corrupt ones.” He said further.

“And Nigeria has gone too far at 100 years to see any discrimination between Judges. Whatever applies to A must apply to B, this is Justice. Those judges Suspended, Dismissed or Retired under misconducts are the likes of Justice Danlami Senchi and should be treated the same in the eye of the law.”, the lawyer gushed in a final tone,