Iyanya Talks about Featuring In A movie Along Side His Ex-lover, Yvonne Nelson 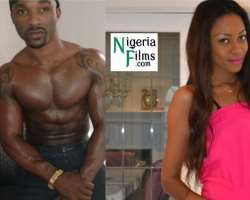 It recently went viral on social media that the Kukere master Iyanya would be featured in a Nollywood movie, alongside his ex lover, Yvonne Nelson, many wondered if the former lovebirds would be comfortable with each other on set; especially if producers ask them to act like lovers again.

Well, Iyanya made his feelings about that publicly in a recent interview. Iyanya said this when he was asked:

Would you be comfortable with Yvonne Nelson on a movie Set?

I have never been with her on a movie set so I don't know how comfortable I will be.

But you don't have a problem being in a movie with her?

I don't have any problem. I am doing business. I am not here for celebration or family ties. Pay me for the movie. If you want me to do a movie with anybody from anywhere, pay me and I will do it.

Some fans have spun tales that the reason Yvonne isn't so comfortable with being with you in a movie is because Elvis Chuks might have you both do a sex scene.

That's bullsh-t. Just pay me. If you want me to do a movie with anybody, pay me and I will do it.

Okay, so you would do a sex scene with Yvonne Nelson.

I didn't say that oh. It's you that said it oh. I said pay me oh. Later I go see am for twitter that Iyanya said he will do a sex scene with Yvonne Nelson then the girl go come dey talk nonsense for Twitter. Abeg oh!