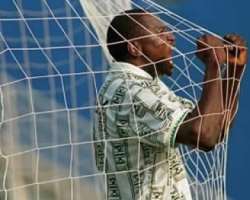 Barely two years after Nigeria lost a football hero, Rashidi Yekini, the Yekini family has again been thrown into mourning as the younger sister to the late football icon Rofiat, passed away on Wednesday.

According to Yekini's lawyer, Barrister Mohammed Jubril, Rofiat, mother of three, who was returning back to Offa from a business trip, as well as two others, died on the spot. She was among the 18 occupants of a commercial bus.

The accident occurred around 1pm after their 18-passenger vehicle had a head on collision with a lorry along Okuku-Osogbo road, in Osun State.