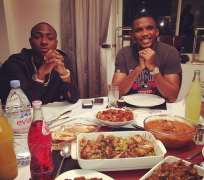 Popular music artiste, Davido who has been in the news lately from reports of his girlfriend having a set of twins for him to showing off his Gold-plated iphone, is having a good time to the fullest not minding the controversies surrounding him lately .

He shared a photo of the gift footballer, Samuel Eto'o got for him.The 'Omo baba lowo' who called the Cameroonian footballer /Chelsea striker, Samuel Eto'o his big brother shared the photos below on instagram with caption, "Thanks for the gift big bro !! Brand new rose gold rolly!!
Davido who seem to be having fun and enjoy hanging out with the footballer also shared another photo of him dinning with Samuel Eto'o