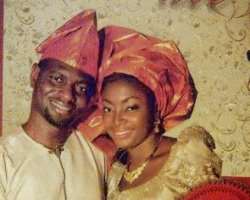 When churches compel ladies who have been s**u*lly active for years to just abstain from the act over night it should be made clear that most of these ladies may just be pretending to be abstaining because of the man they want to get married to in church but they are busy getting "enough servicing" from other men.

This was the big mess that played out at a Redeemed Church branch last Saturday, 22nd February, 2014.

The Senate President's wife, Helen Mark, was to play hostess at the wedding. The bride, Cynthia worked for her and was said to be an orphan thus had become her adopted daughter. Guests got to the venue of the big wedding at about 9am but 2hrs later, neither the bride or the groom came out.

As guests started getting impatient, the groom came out, took the microphone and announced to the surprise of all guests present that he is no longer interested in the marriage...

It later turned out that the the Redeemed Christian Church of God, RCCG, that was supposed to wed them had conducted a pregnancy test for the lady 24hours before the day and the result turned out POSITIVE.

The BIG problem however is that the mam had never slépt with the lady. So, who got her pregnant? The lady on her own part insisted she was not pregnant and went to do her own pregnancy test in a different hospital and the result came out as NEGATIVE. Crazy drama in church.

Redeemed church called their doctor to do a second test and the test traced the thing and it was POSITIVE!

The church did several tests and all came out POSITIVE, but the lady is still insisting that she is not pregnant.

Could it be that she had terminated her "pregnancy" and did not know that the church's test could trace it?

The man insisted that he can't marry a woman who is pregnant for another man, and a liar. David Mark's wife and her people begged the man to forgive and marry her but he stood his ground. Never!

A source told that the man's main anger was that when they were dating she didn't allow him to go "far", meaning there was no special torching. She was trying to paint herself as a good girl before her man, so he can't go ahead and marry her since another man was enjoying what he was denied.

The lady cried but it didn't change anything. Some guests ate their rice others didn't. The man walked away!