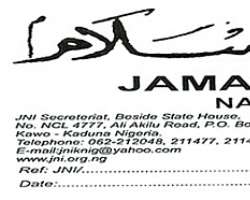 As always, Jama'atu Nasril Islam (JNI) will not be deterred nor will it over look things as they unfold, especially over the repeated wicked acts of terror being unleashed on the Muslims, hence JNI received with shock and distress the senseless killings at Federal Government College (FGC) Buni Yadi, Yobe State, by criminals and what so ever is/are there motive they will not succeed, in-sha-Allah. The barbaric and heinous attack is utterly condemnable in its totality, considering the fact that just few days ago Bama, Izge, Malari, all in Borno State witnessed similar attacks by the terrorists. However, we expect the Federal Government of Nigeria to wake up to its responsibility of protecting lives and property of Nigerians, especially the North East and stop the diatribe. Human lives are sacred and must be treated so!

Also, as with previous similar cases, the sporadic gun shots that ensued after setting the school ablaze is very worrisome and alarming, therefore JNI calls for practical probe that must bring such acts to an end. Despite the State of Emergency currently in place at Adamawa, Yobe and Borno States and the visible security check points at every nook and cranny of the states, it is hardly believable that such dastardly acts could still occur, thus JNI is seriously perturbed by such unabated repeated acts.

It is pertinent to ask the following questions: According to sources, the army was withdrawn a day to the attack, why? What was the motive behind such heinous act? Why is it that the North East boarders have been left porous despite knowing fully the repercussion of such? Indeed there is much more than meets the eyes! Meanwhile, we commiserate with the families of the victims of that evil act and condole with the parents and guardians who lost their wards in the misfortune. We pray the Almighty Allah, grant the deceased eternal bliss and those that sustained injuries quick recovery, Amin.

In the light of the above, we call on Governments at all levels to do everything possible as a matter of urgency to stop these evil acts of terror NOW, and restore law and order in the land.

As the unprecedented havoc being unleashed against innocent citizens is becoming too much to bear and we fear the consequences that may befall the state, if it does not swiftly act, to bring an end to these repeated split of blood. These repeated callous acts call for concerted introspection, as they again and again point to the fact that there is the urgent need for proactive and effective ways of addressing these precarious upheavals. Perpetrators MUST be fished out!

Finally, the Sultan of Sokoto and President-General, JNI calls on all Imams in their respective mosques to commence Al-Qunut (special supplication during human or natural catastrophy, observed during the five daily prayers for ease and relief) and the generality of Muslims are also implored to fervently pray for the restoration of peace and security in Nigeria bearing in mind that without Nigeria there will be no Nigerians.