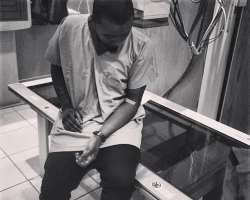 Information reaching us indicates that popular Nigerian rapper, Panchak Zamani, well known as Ice Prince was recently in the hospital in Lagos.

The rapper broke the news on Sunday when he posted a picture of himself in the hospital and urged his fans to remember him in their prayers. “Somebody pray for me. Amen,” Ice Prince posted via his twitter handle yesterday.

When Nollywoodgists.com contacted Ice Prince's manager on the matter, he informed us that the rapper has already left the hospital.

According to him, 'it is not a big thing to worry about, he has left the hospital. The doctor told him to have a lot of rest.” When asked what could have led to the ill-health, the manager said, 'it was due to stress from his frequent travelling for shows. But he is getting better now.'