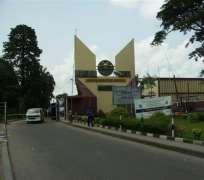 
University of  Lagos is set to name a 15-storey girls hostel after Dame Patience Goodluck Jonathan this Friday.

At a briefing  yesterday, the Deputy Vice Chancellor, Professor Duro Oni, said the 15-storey building expected to cost about N3  billion would be named after the First Lady because of her contributions towards women folks.

He said: 'It is a female hostel and the person due to be named after it is the President's wife who has touched the lives of many women.'

According to him, like other tertiary institutions, UNILAG had been having problem of accommodation hindering students especially the female students getting to school on time, saying 'about 28,000 undergraduates struggle for  8,500 spaces every year in UNILAG.'

Similarly, Chairman of the Fund Raising Committee, Prof. Nwose Chukuma, said: 'The parents' forum is not only building a hostel to help solve accommodation problem in the university, the 15-storey hostel project is named after the First Lady to honour her for her numerous contributions to the development and emancipation of women in Nigeria and Africa.' Vanguard