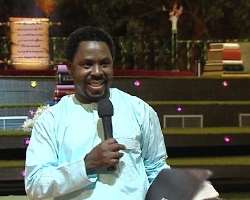 Recently the Ghanaian media landscape witnessed a raging debate, mostly abrasive, over whether Prophet TB Joshua of the Synagogue Church of All Nation's boasted to be the God that led the Ghana's Black Satellite's to victory, when Ghana became the first African team to win the FIFA Under-20 World Cup in Cairo, Egypt. It was indeed Africa! The same attitude was demonstrated when President Atta Mills became the president of Ghana few month ago.

We appreciated the debate which went into the discourse, due to unbelievers but wished that it had not degenerated to the level it has, involving the press, politicians, Pastors as well as individual who have labeled the accused; Prophet TB Joshua in front of news papers and online news sites with sadistic words of which some are so strong worded.

My question to the press; I thought when a story comes to the knowledge of the public, it is expected that it must have gone through a thorough analysis and check by the relevant authorities. Then comes the part that ensures that all involved parties in the news are given a fair sense of hearing so that both sides of the story are not only heard but the final story that is released to the public allows for them to make an informed conclusion? When these above stated guidelines are disregarded, a major part of the ethics of the profession of journalism can be said to have been thrown out of the window; that is the case of Peace Fm, Daily Guide and certain individual running this senseless propaganda. At the expense of finding out source of some of the despicable tales from few of the publication in the past, l phoned few media houses in Ghana, South Africa, and Nigeria to find out from the publishers whether they know TB Joshua. The answer was no, how then did they find out the genuine of the article they publish before they do?

All these disparagement came to the limelight when the current president John Atta Mills saw the need of putting God first in leading his people. The fact is that, Ghana has had 12 head of States since the independence in 1957, who can tell me which of them has publicly honored a man God and to seek God's opinion on the decision they take in ruling their people him? Perhaps those whom have turned the name of TB Joshua in chewing stick, derogatory his name would love it if Atta Mills visit the Volta region to consult a fetish priest, maybe you would eulogize him then. President Atta Mills knows that a man without Christ is equal to crises.

History of Past and present head of state Question to men of God; I would like to believe they are preaching the gospel of Jesus Christ and doing all that he did during and before his crucifixion, if so did He preach condemnation? Did He not deliver and healed the sick? Did He not prophesy to the people? Why then has TB Joshua's name become a subject of disparage among men of God? Why not ask God who is TB Joshua?

Despite the whole yarn, after Ghana worn the FIFA Under-20 World Cup in Cairo, Egypt, Prophet TB Joshua never lay claim of the glory, but said “The coach called me in the morning of the battle in Egypt and said I should join them in prayers. I considered this as a great honor because there are many great men of God in Ghana that had also been standing in the gap for the team. And I was one of these called to join in prayer for the team. There are great men of God in Ghana. We are all prayer warriors…” It has becomes obvious that you all conspire to spoil the name of TB Joshua at all cost. We should remember all fingers are not equal and God gives as He will, and we should let the pain of one to be the pain of all.

Ghana U20 coach Sellas Tetteh admitting that a Nigerian Prophet T.B. Joshua decided which players he should play at the U20 World Cup. Joshua told Tetteh to make Andre Dede Ayew the key to his selection as he was the luckiest player in the U20 World Cup winning squad.

Tetteh admitted that they were in constant touch with Joshua throughout the tournament and he said the pastor's predictions were true.

"Before God and man I was in constant touch with Pastor Joshua all the predictions he made were realized," Tetteh said. But Ayew who was at the centre of Joshua's predictions says all the glory must go to God because people of all faiths contributed to the team's success. And that was what Prophet TB Joshua said “There are great men of God in Ghana. We are all prayer warriors”… Ayew never said that he didn't receive a call from TB Joshua; he only said all the glory must go to God. Following the word of Ayew, it is obvious he spoke to TB Joshua.

If you listen to Prophet TB Joshua, he also said all the glory must go to God. He never glorified himself but only to testify of the goodness of God. I believe he recorded the conversation just for events like this. If the miracles of Jesus were not recorded in the bible, we will not read that He made the blind to see nor made the crippled to walk. This shows that he is a Man of God indeed and a true prophet. I don't think the man of God is giving glory to himself; rather he is glorifying the Lord for the power and anointing giving to him. Why don't you stop criticizing and leave everything to God to judge. Prophet T B Joshua has prophesize match before and it came to past, I see no reason why you should doubt him this time. Before the match between Nigeria vs. Mozambique, he talked about it and even said he saw a goal which would be scored with the head. And it came to past that the only goal scored by Victor Obinna Nsofor of Nigeria was with his head. It is no longer arguable, with the class in which the critics have enveloped themselves; it shows the totality of their kid's style propaganda.

Had I known always comes at last; hence I have chosen to warn you as a son of the soil to stop mischief on TB Joshua