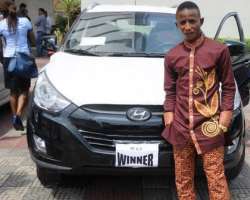 Olawale Ojo has never sang on stage nor auditioned for any musical show until MTN Project Fame Season 6, where he emerged the winner in 2013, he has released his debut single 'Is Notin', If not for the mother of Olawale will never have dabbled into music and he is forever grateful to her, in a recent interview he opens up his life and career

He said “I started music as a hobby because I never thought I was going to do anything with it. It just started from me being interested in music and then when I joined The Redeemed Christian Church of God when I got to the Ladoke Akintola University of Technology, Ogbomosho, I learnt how to play the keyboard and drum. I joined the choir also and that was when I started singing very well and people started noticing my talent. The passion grew stronger, but I didn't think I would take music as a career. I had a shop in school where I was selling and repairing laptop computers and phones and I thought I would probably be some sort of big computer store owner when I graduated from school. “

About his new single' Is Notin' “I recorded it the first time I entered a recording studio. Before Project Fame, I was only writing songs but never had the chance to go into a studio to record any. So I was in the studio listening to a beat by DJ Klem and what just came to my mind was 'Is Notin' and that was how the first few lines of the song came about.”