EMEM ISONG: The Story Behind the Glory 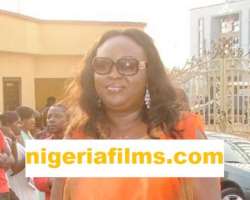 If you thought you knew all about Emem Isong then you are wrong! For the first time this talented writer and movie producer sat down and had a revealing, no-holds-barred chat with nollywooduncut.com about her experience making it as a producer in the world's second largest film industry.

Join us as we go with her on a journey on the rough, rocky road to stardom. This is the first of a two part interview that is not to be missed. Only for your reading pleasure!

NWU: I know you have done several interviews in the past but this time, we don't want the usual media spin. We want to hear stuff that has never been told before.

EI: Now why would I want to do that?

NWU: For posterity, for your teeming fans out there who want to know more about the real you and because … well, maybe you want to humour me!

EI: (laughter) Okay, what do you want to know?

NWU: What should we know that nobody else has ever known before?

E.I: You guys are not serious!

NWU: We are… we are waiting….okay let me help you. What should anyone dealing with you know?

EI: That I'm a very determined person. I don't take no for an answer. When you challenge me by telling me it cant be done or I cant do it, that's when I begin to tick.

NWU: Is that why you entered the film industry when it was not fashionable to do so?

E.I: Maybe…all I know is that from when I was a little, I wanted to be in drama. Not as an actress but as a producer, writer or director.

NWU: When did you enter the industry?

E.I: 1994. After the first home video 'Living in Bondage' was produced, I caught the bug and resigned from my job in the bank and wrote my first script which I titled 'Jezebel'. Then, Nigerian films were shot in Ibo and this was no exception. I teemed up with my good friend the late Francis Agu and he produced it for me. It did well in the market so I wrote my second script, which I titled 'Inheritance'. It was a grandiose story, full of large, sweeping mansions, a huge cast and was to cost me N2million naira to shoot which was a lot of money then. After pounding the streets of Lagos till my soles of my shoes chopped, I decided maybe the world was not yet ready to receive my script yet! (General laughter).

Emem and crew on the set of 'Guilty Pleasures'.

NWU: So what next?

E.I: I went back and wrote yet another script! This time a script with just three main characters and funny enough, that has been my writing style to date.

NWU: So how did you get that script shot?

E.I: I started pounding the streets of Lagos again, looking seriously for sponsors. I had no car then. One day, exhausted, broke and disappointed by a prospective sponsor, I went to see a cousin of mine who was living in Ikoyi at the time. I wanted to collect some money from him for transport fare home and other things. When I got there I found out he had traveled! It was at this point I sat on his doorstep and began to wail! (General laughter)

NWU: My goodness! So what did you do then?

E.I: Its funny now but it was no laughing matter then! I managed somehow to get back to my house and crawl under the bedcovers, weeping. I was so tired, depressed and fed-up. It was then that my kid sister Uduak Isong-Oguamanam who was on holidays from in University, suggested that I ask my parents for the money. I didn't think that was a good idea as they were retired civil servants and didn't think they could sponsor the film. She insisted that I still call them and ask and I did, weeping and recounting my tales of woe. To my surprise, my parents said they would give me N60,000 as contribution towards the shooting of my film!

E.I: Yes! Then things were not so expensive and also I believe God just gave me incredible favour with a lot of people.

NWU: But how could you have shot an entire film with only N60,000? Even then?

E.I: I tell you I did. I was very bold and determined in those days. I had just watched a film by Tunde Kilani titled 'Ti Oluwa Ni le' and I liked how it was shot. I then marched to his studio, armed with my script and asked to see him. I was ushered in and I spoke very passionately about my script and how much I wanted to see it shot. He just stared at me. I asked how much it would cost to rent his camera to shoot it. He said about N80,000 for the number of days I needed to shoot and asked how much I had. I said N10,000 and he threw back his head and laughed. He then surprisingly, agreed to accept it and collect the balance on completion of my film. I then decided to push my luck a little and asked for a cameraman!

E.I: (laughing) Yes! I told you I was very bold and determined. Anyway, he then called his cameraman Sunday Ogunyemi, a very pleasant fellow to go with me and the equipment.

NWU: Impressive! Imagine a first film getting consultancy and crew from T.K himself! Please go on. What happened next?

E.I: Tunde Kilani then directed me to the late Femi Aloba of Niger films who I later discovered was one of the best sound men in the country. He called him and told him to help me with sound. Mr Aloba listened to my story and gave me one of his sound men, Ayo Oluwasanmi to be with me on location. Not only that. He gave me a space to use as my office on his premises… all for free!

NWU: Wow! That must have been some rapping! What exactly did you say to them?

E.I: (laughter) It was just God's favour. I had no Godfather or 'Unseen hand'(throat-clearing) helping me! (General laughter)

E.I: I invited some colleagues to be on the panel with me and called for an audition in that office space. Several people came but out of all of them, I didn't see anyone good to interprete the role of my female lead character. The only known star then in the film was my friend Francis Agu who had acted in 'Living In Bondage' and 'Jezebel' and I had cast Kate Henshaw who was then upcoming, as supporting actress. She used to attend my church and we had both attended the same secondary school. I remember I cornered her after church and bullied her into acting in my film on credit! Same with Francis. But I still did not have my female lead who I wanted to be a new face.

NWU: You really had very strong convictions about what you wanted! Go on.

E.I: After the audition the director, my colleague Amaechi Obi and I were about to pack up and leave when a young girl rushed in with a note from a good friend of mine, wanting to be auditioned. We wouldn't have attended to her but for who she was coming from. That apart, nobody gave her a chance because she was quite young looking and the role called for that of a much older, sophisticated actress. Since she was already there I said she should at least read for the scene. She took the script, opened her mouth and read and everyone was blown away! I knew instantly I had found my lead character even though she had never acted professionally anywhere before. That person was Stella Damasus and she remains one of the strongest actresses Nigeria has to date!

NWU: I agree… I hope you get to work with her again in the near future. That, by the way is shameless pleading!

NWU: So Stella acted in the film… what was the name of the film by the way?

E.I: “Breaking Point' and it really had me at my breaking point several times in the production! (laughter) It was shot in 1995 and all the cast and crew agreed to act and work on credit till I had finished shooting, editing and selling the film! But that was then you cant try that now… they wont even answer you! (general laughter)

NWU: What about the other aspects of the production like costumes, makeup…

E.I: For costumes, I got Stella's dress size and raided the wardrobes of my friends and former bank colleagues! Make-up and hair was done by the actors themselves. For welfare for the cast and crew, I wore rain boots and went to Mile 12 market in Ketu to buy the foodstuffs myself! I then called a cousin who did the cooking in my house!

E.I: You haven't heard anything yet! For transportation to take the crew and equipment to location, I hired a 'danfo' (yellow and black public bus)to do that. Even after being so economical, the N60,000 finished half way through the shooting! Again I sat down and wept! The cast and crew were confused. They didn't know whether to be angry and walk off or to console me. God knows why they decided to do the latter and they rallied round and comforted me! I was then revived and made a couple of desperate calls to former colleagues. They then sent me some money in piece meal which I joined together and was able to complete the last bit of the production.

STAY TUNED FOR PART 2 OF THE INTERVIEW: ENTERING IDUMOTA!

Not to be missed!