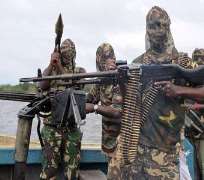 Picking a copy of Daily Sun of Monday February 17th 2014,I immediately had a traumatic emotional shock by the level of carnage and savage attack on humanity that has now become so unbearably painful and pathetic. The cover shouted that over one hundred human persons were massacred at the weekend by elements suspected to be armed Islamic rebels in the state of Borno.

At severe pain to completely comprehend the savage genocide being masterminded in the North East of Nigeria by armed Islamic hoodlums who have waged war against the Nigerian state for two years and still counting, a number of issues cropped up regarding the inability or so it seemed of the Nigerian military to contain this insurgency that has clearly posed devastating threats to Nigeria's survival as one united political entity under one sovereign head.

My emotional and psychological pain is made even more devastating by the cruel fact that the Nigerian state seems to have failed the people in the most critical constitutional role of protecting their lives and property.

Sadly, on daily basis, both the foreign and the few brave local media workers based in the war zone, keep updating the rest of us on the traumatic, graphic and very cruel high rate of casualties involving primarily the hapless and seemingly abandoned rural poor who bear the savage brunt of the devastating and horrendous violence unleashed on them by freelance armed fighters who reportedly usually dress up in military uniforms and said to be so well armed with sophisticated weapons that scares the hell out of the conventional operatives of the armed security from the Nigerian state.

The picture painted of graphic massacre of hapless women, men and children and the relentless kidnapping of innocent school age girls to God knows where by the insurgents have become even more heart wrenching.

For two years now, President Jonathan has experimented with high profile changes in the leadership cadres of the military but the killings of both civilians and massive destruction of military assets belonging to the Nigerian state have become even more disturbingly frequent but all that the rest of us hear from the top echelons of Nigerian military are empty and seemingly false hopes.

We no longer know between professional soldiers and the perpetually lying politicians whom to believe. To whom do we go to who will give us the message of truth and the soothing balm to calm our frayed nerves?

Nigerians have also faced the intellectual insults of military hierarchy making promises to end the insurgency within specific time frame but only to hear another series of denials from the same top ranking professional soldiers who had earlier made promises.

But what really are the constitutional functions of the Nigerian military and what is expected of the Nigerian state to end these unfortunate vicious circles of mass killings and abduction of female students for use as sex slaves which clearly constitute crime against humanity and genocide of the most cruel form?

Brigadier General Thomas Chiefe (Rtd); who held a doctorate degree in law and was for many years the Nigerian Army's director of Legal department at the Army Headquarters in Abuja, authored a beautiful military law book few months before his death only few months back in Abuja.

In this book; “Military Law in Nigeria under Democratic Rule,” General Chiefe thematically presented the role of the military. Judging from his conclusions, what is imperative is that the nation's sovereignty hinges on the competence, professional ability and combat readiness of the Nigerian military and no effort must be spared to ensure that the Nigerian military is insulated from mundane politics and that the men and officers of the Nigerian Armed Forces will keep their constitutional vows to maintain the territorial integrity of Nigeria come rain nor shine.

His words: “The Nigerian military does not perform its roles in a vacuum as it derives the roles from the constitution, presently the Constitution of the Federal Republic of Nigeria 1999.

As stated earlier, the Constitution, the General stated, is the grundnorm or supreme law that voids any other law that is inconsistent with it to the extent of the inconsistency.

According to the late military General who excelled in both military and civilian Nigerian laws, Section 217-220 provide for the establishment, roles, command and operational use of the armed forces ad related matters.

For clarity, section 217(1) and (2) provides as follows: “there shall be an armed forces for the Federation which shall consist of an Army, a Navy, an Air Force and such other branches of the armed forces of the Federation as may be established by an Act of the National Assembly.

Going through the constitutional roles of the military in Nigeria as encapsulated by the late military legal mind, one is immediately reminded of the saying by General William T. Sherman that; “No man can properly command an Army from the rear. He must be at the front. At the very head of the Army. He must be seen there, and the effect of his mind and personal energy must be felt by every officer and man present with it….”

What do we have in Nigeria if I may ask? Aside the fact that the top most military commander in Nigeria (Chief of Defence staff) operates from air conditioned office complex in one of Africa's most decorated cities (Abuja), there are widespread speculations that those armed insurgents invading selected targets at will in the North Eastern Nigeria are better equipped with state-of-the-art weapons. These claims have yet to be independently confirmed except that those who bear the brunt of these vicious attacks and violence by the insurgents have rendered accounts to state that the fighters invading their abodes were well armed.

Understandably, the military spokesman in Nigeria who operates from another equally cosy office in Abuja has reportedly denied the widespread allegation that his rank and file fighting terrorists in North East of Nigeria are better equipped.

Here are some immediate pragmatic steps to be adopted to wage result-oriented anti-terror war in Nigeria. Let the principal military commander in our case the Chief of defence staff, relocate temporary to the North East to effectively coordinate the fight against terror because these insurgents have demonstrated more than enough evidence that they are targeting the destruction of the Nigerian state.

To compliment the military effort towards curtailing the effects of invading armed freelance fighters into Nigeria, let the office of the Nigerian custom's comptroller General and his opposite in the Nigerian immigration services [NIS] be relocated to North East Nigeria to coordinate effort at making Nigerian borders less porous.

On a larger scale, the Nigerian government should consider signing defence pact with either Britain or USA to counter the French incursion through Cameroon. The allegation by a University professor with considerable knowledge of international affairs that the French government may be aiding and abetting the invasion by armed insurgents into Nigeria should not be taken lightly.

Sadly, the Nigerian state has failed to use its influence in the sub-region to compel the sub-regional body [ECOWAS] to maintain an effective fighting force around the porous borders of Nigeria from where the armed insurgents are reported to be using to invade parts of Nigeria. Why is Nigeria making so much investments into the administration of this sub-regional group if the security interest of Nigeria is consistently sabotaged by other member nations who willingly look the other way while armed insurgents use their territory as training and launching grounds to attack Nigeria? Why has the Nigerian military not bombed those routes insides those nations whereby these armed marauders operate from?

Nigerians are sick and tired of the empty rhetoric and promises from both the military and government hierarchies to end the unending rounds of mass killings. Nigeria's current chief of defence staff initially gave April as deadline to end terrorism but after several daring attacks by these insurgents, he has adjusted this widely publicized promised time frame.

The federal government must therefore take a range of measures to secure the Nigerian borders and sufficiently put practical measures including granting gun licences to Nigerians to protect their God given right to life which is constitutionally guaranteed.

The Nigerian state must view what is going on in North Eastern Nigeria as serious genocide and must set up investigative panels to collate and generate essential evidence to be used to prosecute the alleged masterminds locally or internationally at the International Criminal Court in The Hague, Netherlands..

The Nigerian state must also reform the way it is waging war against financing of terrorism by immediately putting pressure on the National Assembly to pass the pending executive bill to create an independent National financial intelligence Department answerable only to the National Assembly and the presidency.

The fact that terrorism financing has remained undetected by the current anti-graft mechanism in place is one of the fundamental reasons for the sophistication of the category of fighting weapons being deployed reportedly by armed insurgents. If I may ask, where are the armed insurgents procuring their military uniforms and fighting weapons? What is the intelligence arm of the Nigerian military doing that they are unable to trace this trail and stop the use of Nigeria's military uniforms reportedly by these insurgents?

A stitch in time, saves nine.