Pictures From Basketmouth Uncensored’s Sold Out Show In London 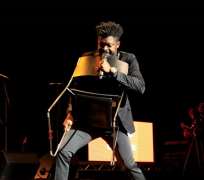 On Sunday, February 16, 2014, Basketmouth again showed to the people of London in the United Kingdom why he is the king of comedy in Nigeria.

At the o2 Indigo, venue of the Basketmouth Uncencored Valentine Special show, no single seat was left in the hall as the show was sold out.

The comedian kept London laughing for two hours with undiluted jokes. Information at our disposal shows that many were even turned away at the door by security as there were no more extra seats to contain them.

Below are images from the event.