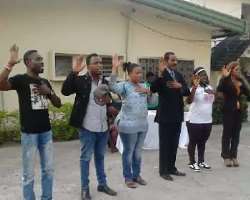 The Cross Rivers State chapter of the Actors Guild of Nigeria (AGN) now has new members in its execuitive positions.

In an election held over the weekend, Monica Udofia emerged Chairman of the state chapter of the guild while Precious Otu was elected as the secretary.

Also elected were Prince Anderson Edim as the PRO, Joe Omini as the DGS, Susan Samuel as the treasurer.

They have already been sworn in.