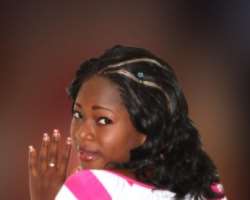 Stephnora Jacob-Lampinen did not make the AMAA nominations this year, but the beautiful, young, talented actress seems undeterred and looks to the future with bright hope. She reads lines differently from her counterparts, a little softer here, a little louder there. And you don't get the sense that she hesitates to say or do much of anything on camera, making her an exotic form of clay for most directors. The newly married Stephnora Jacob, now Stephnora Jacob-Lampinen sits down for a chat with EBERE NDUKWU. Enjoy!

Your resume has an incredibly diverse mixture of TV, Radio and film.

Yeah, I've had a really interesting career doing what I love and making a living through it. It's very rare that many of us in the industry go from one thing to the other as much as I've been lucky to have done.

Let's talk about stage, film and television in comparative term.

They're all very different. You're doing exactly the same thing, very differently. In film, there's always this discussion of rehearsal, but as actors know who their characters are, what they wear, how they live, what their relationships are with their scene partners, you can just have the actors play the scene with the camera running and capturing something that nobody could have constructed beforehand. The capturing of an image that film does, that's what makes movies magical. Television is similar, but at a much faster pace. You have to turn things around very quickly in television. So it's doing the same thing, but with very different tools and rhythms.

When and how did you come into acting?

It's hard to say, ever since I was a little kid back in school, I have been involved in drama. So, I loved it back then, and watching lots of movies, I decided I wanted to make a career in acting.

What type of story interests you?

A story with moral lessons; which inspires and encourages.

Let's talk about actors who are also directors, Is their understanding of the craft more intimate, which provides a kind of shorthand between the director and the cast?

I might be wrong you know, but I have to be completely honest here. I like a director who directs, I like an actor who acts. An actor can make a brilliant director, but I don't think it's so great when actors direct. If the actor is not a member of the cast in the movie, and is just directing, then that's okay, but if the actor is a member of the cast and as well the director, that's not so great, it's my opinion.

But even as an actress, you also write and produce, so what's the difference between a producer and a director?

There's a lot of difference between the producer and the director; the director is the creative vision behind the movie. He determines the music, has a say in casting, consults in scripting, and also consults in editing.
Depending on the scale of the production, the producer usually gathers together the money, and makes sure things run smoothly on the business side of the movie. On some large scale studio productions, the producer will hire the director and wields power over him, whereas some independent filmmakers will either be their own producer or will work in tandem with a producer so the filmmaker will only have to be bothered with the creative side of things and not the bookkeeping. In most cases, the producer is same as the executive producer. A good producer will work with the director's creative ideas and not just wield powers.

Challenges as an actress

TV,radio and MC. My sister once joked about me being in love with the MIC (laughs)

Are you comfortable as an actress?

How payable is acting job?

You and I know that show business is the fastest money spinning industry in the world, this might not be the case in Nigeria, because a lot of things are yet to be put in place, like film funding and all that, so far nobody earns same as Angelina Jolie or Nicole Kidman, but we are all comfortable.

What can you boast of as an actress?

I can boast of my amazing life, I have a family who loves me, I am blessed with good friends who have been there for me through the good and bad times, life is so beautiful and I couldn't ask for more!

People refer Nollywood movies as being quantity and not quality what's your reaction?

Are they still saying that?, well with the recent turn out of quality movies coming out of Nollywood, be it by Nigerians in the Diaspora or Nigerians at home, I don't think anyone should say that anymore. We work so hard in this industry, funding is a big problem, it is the only reason why anyone would make a low quality movie.

What determines the role you play?

The script. I've done crap movies in the past, and now, it's a no-no.

Are there scripts you can turn down?

Can you play nude?

Do you see Nollywood challenging Hollywood and Bollywood someday?

I do … why not? I see a Nollywood film making it to the Oscars someday.

Do you watch the movies you featured in?

That's imperative, that's the best way to deal with most of the criticisms from movie critics, even though most times the criticisms are just not constructive. But I watch my movies to see how good or bad I did.

Some up-coming actresses don't mind getting a role by trading sex, what's your reaction to that?

That's degrading. If you think yourself talented enough to be in the industry, then you don't need to grease anybody's palms in whichever way.

Do you think you've hit the limelight?

Yes, but more as a TV presenter than an actress, so I'm still looking forward to the big break (laughs)

How can you assess Nollywood Directors?

Directors get too much credit when a movie goes right and too little blame when a movie goes wrong. There are certain directors, however, who get credit even when movies go wrong, I call them overrated directors. But there are Nollywood directors that always have my heart, because they understand the business of film making, and they combine their creativity and wealth of knowledge to churn out real interesting movies.

You abandoned law for acting, any regrets?

No. I am happy with the decisions I made, I love what I do, and there isn't anything as cool as job satisfaction.

How can you define love?

Love is not an action; it is a moment made of many moments. Its heart-wrenching, air gasping, devastating yet so beautiful and strikes our curiosity. It can bring you up from the lowest points of despair and can bring you straight back down. It is not simply 'I love you', it is the actions implied, it is forever and for always, it is a moment in time made of many moments in time, it is a life time gift passed on through the generations, it is one true and honest aspect of humanity. It is a beautiful, understood need, want and fulfilment, that makes humans whole. To love means to protect and provide. God's word even points that out.

How do you measure love?

Love is not measured by how much we do for someone else, but how much we give up for them. If you want to measure your love, you must consider how much you have given up for someone else. Christ Himself has told us "Greater love has no one than this, that one lay down his life for his friends" (John 15:13). You and I will not ever grow in love unless we grow in the laying down of our own lives. Greater love means greater sacrifice. If there is no sacrifice, there is likely no love.

You got married recently, how different is your married life from when you were single?

Oh… you know before I got married, after a hard day, I can just take a shower and 'plop' on the bed, and take my much needed sleep. But now, I have someone to share my daily activities with, so it's much more fun, and I married my best friend, so we have a great life, it's pure bliss.

Let's talk about your husband Aaron Lampinen. He is an American, and he doesn't live in Nigeria. Being married to him means you have to leave your country, your career, family and friends and move to the United States, is that very easy for you?

Its not … when you love someone, you make sacrifices, you give up some things. But I'm not giving up my career (laughs)… my husband wouldn't want me to do that. That's why I always come back to Nigeria regularly for work and to visit family and friends.

Have you ever had heartbreak before?

Who hasn't? But it was no 'biggie'. I always get on with my life.

Have you broken anybody's heart before?

I don't know, definitely not intentional if ever I did.

How do you measure incompatibility in a relationship?

Being right for each other is more about having a "fit" of your personality, habits, and things you think are most important.

What can bring tears to your eyes?

Where do you see yourself in the next 10 years?

Next 10 years… wow! I look to the future with great hope, I am a very optimistic person and I believe in myself, so I think by God's grace, 10 years from now, I'll be a better person in all aspects of my life.

Are you disappointed with this year's AMAA nominations?

Who among the nominees for best actor and best actress in a leading role do you think should win?

I always say, "let the best man win". Being nominated is like winning, there are many talented actors, so I think anyone nominated should be happy.