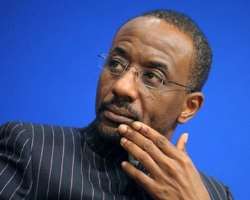 
Listening to the Central Bank of Nigeria Governor, Sanusi Lamido, is like listening to the mix-tape of a confused fellow. Like water from a broken pipe, he keeps spurting conflicting figures of missing funds from NNPC.

In the last quarter of 2013, the controversial Central Bank of Nigeria governor raised alarm that $49billion of crude oil revenue was purportedly unaccounted for by the Nigerian National Petroleum Corporation. When the smoke cleared and the books were properly looked into, everyone realised that the conjured figures quoted by the governor of Nigeria's apex bank were so off the mark that even the ordinary market woman sniggered.

Now, we are in a new year and like a dog bent on tearing apart a ragdoll, Sanusi has come again with another set of questionable figures. This time, he is claiming that NNPC is yet to account for $20 billion from the total $67 billion oil sales receipts from January 2012 to July 2013. Where exactly are these conflicting figures being pulled from?

It is not a crime to demand accountability from our office holders and various ministries and parastatals. However, it must not be done in a witch-hunting manner devoid of thorough research and causing unnecessary bedlam.

Mr. Sanusi is known for his cowboy-like behaviour, which is unbecoming of such a high-ranking civil servant who should be steering Nigeria towards economic growth.

What would it take for Mr. Sanusi to calm down, peruse the books intensively before going to the top of the mountain to throw numbers down from his high horse? A man who is the oracle of our financial world should mind his words. Dealing with national financial figures that control the temperature of our economic institutions all the way to the stock exchange market is not like shooting fish in a barrel. The appearance of incompetence on the part of the CBN governor is all it takes for Nigeria's foreign direct investors to develop cold feet. Our growing economy cannot afford Mr. Sanusi's carelessness.

Can you imagine what would happen if the US chairman of the Federal Reserve Board, Janet Yellen, starts regurgitating numbers she was not sure of? There is no doubting the fact that every time Mr Sanusi gets his facts and figures wrong, a good number of Nigerians wonder if this is his first faux pas or if he threw away the baby and the bath water in his Aegean's table clearing of bank executives four years ago. One wonders if that whole exercise was a vendetta to settle old scores, knowing that our CBN governor used to be one of them when he was a First Bank MD.

Nothing Mr. Sanusi does can be taken at face value; the CBN governor is too sleek for himself, a total show pony. He allegedly leaked to the press what was meant to be a private complaint letter to the President, something that irked President Jonathan to no end.

The more this tornado behaviour of the man in charge of our apex bank occurs the more one seeks answers to some hard questions asked by Professor Peter P. Ekeh of State University of New York at Buffalo. Before Sanusi was appointed CBN governor, Professor Ekeh wrote an article and warned Nigerians to be careful about Sanusi's doubtable financial pedigree: 'We may demand to know from Nigeria's Chief Economist whether he took any professional examinations in banking while he worked at ICON Limited (Merchant Bankers) and United Bank for Africa before he became the CEO of First Bank of Nigeria…'

Matter of fact, Professor Ekeh's worries and concerns that are manifesting now are worth sharing with Nigerians who did not read the article in 2010:

Nobody is saying the NNPC, which is one of the nation's most important parastatals, is shady with their accounting, but do they really need the distractive bullying of Mr. Sanusi? The CBN governor is beginning to behave like a corrupt DPO forcefully coercing a confession from an innocent citizen just to look good in the eyes of his superiors at the headquarters. If anything, Mr. Sanusi the confused banker should do Nigerians a big favour and change the batteries in his old calculator to get his figures right. Ashazobor, a public affairs commentator wrote from Abuja