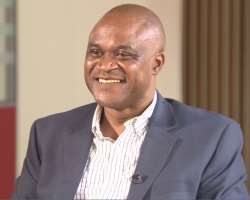 The interview, with CNN's Nima Elbagir will focus on Stewart's journey as a Nigerian scientist in diaspora and how he intends to use Africa's first commercial technology research facility to help create innovative solutions to challenges in Africa.

Stewart recounts his desire of wanting to be a professional computer scientist, after his first degree at the University of Benin; he applied for a graduate scholarship at the University of Cambridge in England. To broaden his horizons, Stewart moved to the United States, where he joined the International Business Machine (IBM), one of the most prestigious research companies in the world.

With knowledge in the area of speech recognition and two decades of experience as an artificial intelligence researcher, Stewart decided to return to his home continent in a role that will help him solve some of Africa's everyday problem as the Chief Scientist at IBM's first commercial technology research facility in Nairobi.

Stewart advises global organizations around the world to follow IBM's footsteps and invest in Africa. He says “IBM believes in Africa and wants to be part and a catalyst to its growth, this is why I truly love IBM, and this is why we are here to make a difference”.