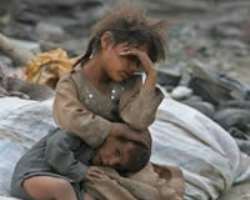 Shelter is one of those basic needs man has been able to provide for his families right from the beginning for privacy, from the sun, rain and hostile weather such as cold and hot environment. Homelessness is a new phenomenon that started from the late seventies to early eighties in the richest countries of the world when mental hospitals released their inpatients. These displaced folks were homeless by others' choice, not theirs. Now, there are some to escape responsibility.

Africans always have shelters over their heads. There is a difference between homelessness and inadequate housing. Every family, yes, every family member does not leave their father's house until he builds a new household for his new family. This is the reason you may sometimes find two or three generations living in grandfather's household. Over the years overcrowding has resulted as poverty and mismanagement of resources by their governments have increased.

But then, they are the same managers creating artificial homelessness. After Independence folks are still waiting for fertile land they were driven from in South Africa. Crippling sanctions were imposed on Zimbabwe for taking their fertile land back. Believe it or not, foreign land grabbers are back in Tanzania and other places displacing people from their fertile land for foreign farmers to establish agribusiness with modified genetic crops for export.

No sane person in Africa lives freely under the sky. That Africans live on trees are ancient fiction for the story book and movies. One may disagree with the materials used in some of the houses like mud, wood and sometimes ropes from trees to tie wood and mud together. It is still shelter that covers the heads of the families. The fact that natural wood is turned into different types of manufactured wood from the factories does not change the composition anywhere.

A man in point in the history of Nigeria is Umaru Diko, one of the ministers that told us we were lucky because he found homeless people in American eating from garbage on the streets. Well, situation has changed and poverty in the cities has subjected some Africans to that low period in our life. Even then people made homeless in Africa by war, our government, foreign farmers and developers cannot be compared to those in the rich countries with human rights activists.

Nevertheless, it is surprising when African newspapers claimed over fifty percent of Africans are homeless. They justify it by using inadequate housing to boost their statistics. This is ignorance. It is true that the amount of slums have increased around the cities and many are so depressing that they easily qualify as inadequate but they are still shelters that give the inhabitants dignity over their heads. If these are the 50% counted, they must have quoted statistics from foreign press without basic knowledge of the people. They are not homeless and do not live on trees!

Some of the worst slums we have seen are in the richest countries of the world; few lack toilets and heaters in cold climates. It is even worse in places with warm climates. Yet, nobody ever class those living there as homeless. Actually, in the cold Northern parts in the rich countries, it was after the Arab oil embargo in the seventies that home heat efficiency programs were put into place for indoor heating system and modern bathrooms.

This writer was so surprised when he looked into a few houses in the 80s: he had to ask where they used to go when nature called. He was told there were public showers and bathrooms. Well, in Africa where we came from, when we were growing up there were also public toilets and water pumps in certain locations for some houses without. But we had water running 24 hours a day and some people would get up very early to fetch water in order to beat the rush.

It will be an insult to tell slum or ghetto dwellers anywhere in the world that they are homeless. Even in rich countries, some of those that got good paying jobs refused to move away from the ghetto to areas where there are better housing. Some Africans can identify with that when new low cost housings were built in the suburbs far from where they were born and raised. They refused to move. The area you know is more comfortable than unfamiliar area and people.

The situation is different in Africa these days. We have the cities that can be compared to anywhere in the world with the most beautiful houses and highways. However, you cannot be guaranteed of free flowing water and electricity as when we were growing up. While there are beautiful houses everywhere in Africa, the quality of life has been changed by greed.

The homelessness we have nowadays is different. Many are beggars milking the generosity of people that wonder how some Africans become so destitute and homeless on the street in the midst of abundant natural resources. Apart from people that need mental health as 20% of homeless in rich countries, many of the beggars left adequate shelters in their villages to come and beg in the big cities exploiting the sympathy of those that hate homelessness.

Some of them use begging as business and recruit others to beg for them. They used what they make from it to build modest houses in their villages. A few of the beggars refuse to take small change or petty cash while one accept credit card! Others watch houses for armed robbers. Since they have become eyesores in the cities, governments as in New York City, have been repatriating them to their states of origin, creating controversy.

What we have these days are governments competing to build housing for the rich. They have become land speculators for their cronies, big business and foreign farmers that entice local land owners. They buy from fathers to dispossess their children. Turn around and sell the same land to the highest bidders, usually foreigners. Apart from greed to make money from projects, it is difficult to understand why they think the rich need government to build houses for them.

Consequently, over priced houses flood the market looking for buyers that have been provided for by the government. These governments are crowding out private companies that should be making money building houses for sale that the local market can bare. Since working-class folks cannot afford to pay high rent in overpriced market, they move further away from cities to build theirs. It could be cheaper than high rent. Others squatted around cities, called homeless.

The problem of inadequate housing must be address locally by governments. In Nigeria for example, during the time of President Shagari at the Federal level and Jakande at the state level, basic housing was a major program. While we heard a great deal of criticism of those programs, action for alternatives has been lacking. No appreciable housing for working class since then.