" It Is Not My Headache, Iyanya Have A Deal With Lenovo"--Ubi Franklin 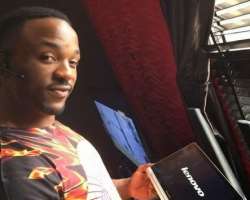 Days after the news that Iyanya did not sign an ambassadorship with Lenovo,, his manager, Ubi Franklin has come out to clarify a lot of issues surrounding the controversial deal, he insists the deal exits whether the company is denying it, it is not his headache.

Ubi Franklin explains : 'If Lenovo says that, then that's their business, my artiste has a deal to promote their products here in Nigeria and in a few weeks, you'll see what we're are talking about', he also denied saying he revealed that the deal cost N150. 'I never said any amount to your reporter. It's not the first deal we've had, deals come knocking but we're very careful to pick what we want to do, please understand this'.