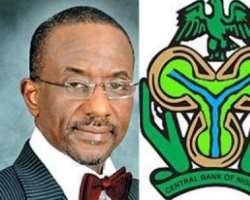 Bankers were planning yesterday a rescue mission for the naira. They also discussed the preservation of Nigeria's foreign reserves.

The Bankers' Committee, at its 315th meeting in Lagos, agreed that a robust defence of the naira and the foreign reserves should top the economic policy.

The Bankers' Committee comprises the top management of the Central Bank of Nigeria CBN) and bank Chief Executive Officers (CEOs). It is chaired by Group CEO of First Bank, Mr. Bisi Onasanya.

Onasanya told reporters after the meeting that rising capital outflow and dwindling oil revenue are taking a toll on the naira and the reserves. This trend, he said must be reversed.

He said Quantitative Easing taking place in most advanced economies have raised incentives of investing in those countries, stalling capital inflows into emerging markets like Nigeria. He said this is adversely affecting the naira and the reserves.

Among the measures being taken according to him, is the raise in Cash Reserve Ratio (CRR) at the November 17, Monetary Policy Committee (MPC) meeting. The ratio for public sector deposits was raised from 50 per cent to 75 per cent. He said the target of the CRR hike was to address the exchange rate problem and to defend the naira.

The Committee also agreed that the CBN needed to take proactive measures that would lead to improved deposit into the foreign exchange reserves.

He said the resolution of the crisis in Iran as well as the impact of the quantitative easing, have led to investment outflow from Nigeria. 'Given the dwindling revenues from oil and the impact on foreign reserves, it became apparent that the options open to the CBN and the MPC were reduced and that was why they further agreed to increase CRR to75 per cent. These were measures taken in order to ensure that we continue to address the exchange rate problem in Nigeria,' he said.

Onasanya said there is the likelihood of raising the CRR to 100 per cent, as the worst case option.

'It is an MPC decision, but it was discussed very clearly that if we do not see improvement in foreign exchange earnings, the CBN made it clear that they may move to 100 per cent,' he said.

'There is no country that will just allow its exchange rate to be left and not managed. The mere fact that those actions have been taken also indicates the fact that the central bank is willing to do everything within its power to ensure that the currency is not devalued. We have seen statistics from the CBN in terms of the continual reduction in the balance of foreign exchange reserves and when you are confronted with that, the only option is to continue to tighten until you see the reverse,' he said.

Onasanya added: 'The CBN has also made it very clear that there is a limit to which it can continue to defend the naira. But when you have depletion in external reserves and external factors, it simply means you can't control the outflow from the country. So it is not unlikely that you will see some portfolio investors moving their funds out of Nigeria into where they consider being more attractive,' he said.

CBN Head Shared Services, Chidi Umeano said the cash-less policy which is being test run in six states apart from the Federal Capital Territory (FCT) Abuja, will be implemented nationwide from July 1.

He said: 'A decision was reached today that the cashless initiative would now be deployed nationwide. As you are all aware, the pilot phase was done in Lagos about two years ago and last year, we implemented in six other states namely Abia, Anambra, Ogun, Kano, Rivers and FCT'.

The success o the programme in the pilot states have led the CBN to move to other states.. 'By July 1, we are going to live in all the states of the federation. As you well know, this is a critical part of the payment system modernisation and the success registered so far has been very impressive,' he said.