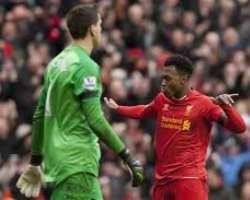 
Liverpool made Arsenal look ordinary as the Reds went on a scoring rampage to thrash the Premier League leaders 5-1 after netting four times in the first 20 minutes on Saturday.

Liverpool ended Arsene Wenger team's eight-match unbeaten sequence and cut its deficit to the Gunners to five points with the Merseyside club strengthening its fourth place.

Liverpool was irresistible in the early stages and all over Arsenal defenders, with every attack tearing apart the Gunners.

Raheem Sterling then made it 3-0 before Daniel Sturridge beat Wojciech Szczesny with a left-footed shot in the bottom corner.

Sterling then completed a brace after half-time.
Mikel Arteta pulled one back for Arsenal from the penalty spot.–AP