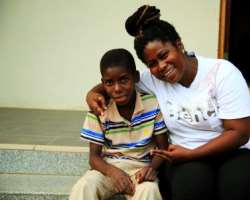 A 12 year old lad called Emmanuel who was sold to slavery at Gasoekope, a village surrounded by water in the Volta Region has Ghanaian actress Lydia Forson to be grateful to, he was rescued by the actress miraculously when he escaped from his masters and ended up lost on the banks of the Volta River when he met Lydia Forson, the boy who has been placed at the Osu Children's home in Accra is waiting to reunite with his family .

Lydia said: “Our boat was the only available boat. He was afraid to tell us he was running away so he lied that he wanted a lift to the neighbouring village. He didn't know who we were and we saw he was afraid because he was lost and didn't want to say it. We took him with us and in the boat we questioned him. When we were far from the village he finally opened up a little. When we got to Kpando, he tried to escape from us, so he started panicking and wouldn't talk.

She added “But we spoke to his master, reported it to the police and social welfare and took him with us. He finally started relaxing by the third day when he saw we were leaving Kpando. All he kept saying was he didn't want to work on the water and he wanted his mum,”