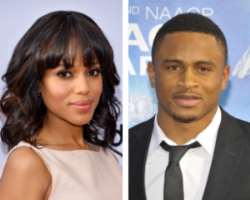 Neutrogena's Creative Consultant/ambassador and actress Kerry Washington is reportedly 'on a break' from her husband, Nnamdi Asomugba! There seem to be trouble in paradise for the cute couple who made headlines when they got married secretly in June 2012.

Nnamdi is reported to be a rather absent husband who leaves his wife alone at will especially now when the Mrs. is heavily pregnant and due to put to bed in a few weeks.

A reported case was his absence at kerry's 37th birthday which she reportedly spent alone in LA while the Mr. was spotted in NYC for super bowl having the time of his life, leaving his heavily pregnant wife all by herself.

It will be recalled that the couple have only made a one time appearance ever- together this year- leaving people to wonder if all is well with their marriage.

Nnamdi has been labelled as one who doesn't support his wife but attracted to her money and fame! Has 2 kids from women who he keeps denying and a heterosexual amidst other accusations thrown his way!

We hope the rumours are not true because we hate to see this cute couple separate!