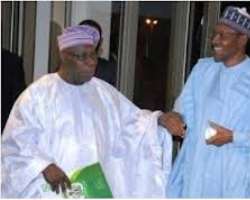 
The National Council of State meeting held for about six hours on Tuesday.

The council deliberated on the planned centenary celebrations, the National Conference, and the security situation of the country, according to sources.

Although it was not immediately known why they were absent, but there have been no love lust between the presidency and the duo.

Buhari is a leader of the opposition All Progressives Congress and contested against the president in 2011.

Obasanjo, who played a key role in the emergence of Jonathan as president, has turned an avid critic of the incumbent administration.

He is believed to be rooting for a power shift back to North.

He is still  a member of the president's Peoples Democratic Party, PDP. The Council also urged politicians to guard their utterances and not heat up the polity.

The Council of State, which is  the highest constitutional advisory body in Nigeria, is chaired by the President.

Other members of the council are all past Presidents and Heads of States, past Chief Justices of the Federation, the 36 state governors, and the leadership of the National Assembly.

Fielding questions from journalists after the meeting, the Benue State Governor, Gabriel Suswam, said the president briefed the council on the National Conference and a lot of contributions were made by the members.

'The president briefed us about a lot of things including the impending conference that is coming up. There were a lot of contributions and the council approved it,' he said.

Mr. Suswam said the National Security Adviser, Sambo Dasuki, also briefed the council on the 'general security situation in the country which all members of the council contributed as to the way forward and the decisions that will be taken to address some of the security issues that are affecting the country and then we concluded'.

According to him, Mr. Dasuki said that some of the 'unguarded statements by some prominent Nigerians are capable of inciting people; that we should be careful as major actors in the polity to avoid making some unguarded utterances that could unwittingly incite the generality of Nigerians.'

'The council took note of that and agreed that people should be more careful about what they say as public office holders,' the Benue governor added.

The council also approved the list of chairman and new members of the National Population Commission.

Also speaking on the meeting, the Imo State Governor, Rochas Okorocha told journalists that the Council deliberated on new strategies on how to move the nation forward.

'We have to adopt some new strategies on how to move the nation forward. Politicians have also been warned against unguarded utterances so as not to heat up the polity. The meeting has helped to resolve a lot of issues.

'We have to adopt some new strategies for tackling security issues in the country,' he said.

Mr. Okorocha also said that although his party, the All Progressives Congress, APC, had not taken a decision on whether or not to attend the National Conference, the party's governors that attended the Council meeting supported the confab.

'We discussed national conference which we see as a welcome development. The Conference is a good development and discussions were not along party lines.

'Yes APC has not taken a position on whether to participate or not but this is not about party position, it is a matter that affects the whole country,' he said.

The APC had opposed the convocation of the Conference, questioning its timing and motive. Since the modalities were released, however, the party, which like four others is entitled to nominate participants at the conference, has not stated whether or not it would attend.

Mr. Okorocha, however, stated that Imo State would send its delegation to the conference.

'As a state, we will send a delegation to the conference,' he said.

The Imo governor also stated that 'on the centenary message, we said that Nigeria must stay together as a nation'.

Attendees at the meeting include former Heads of State: Yakubu Gowon, Ibrahim Babangida, and Abdulsalam Abubakar; and former Head of the Interim National Government Earnest Shonekan. Others include Senate President David Mark, and Speaker of the House of Representatives, Aminu Tambuwal.

The governors of Rivers, Edo, Kano, and Oyo were absent from the meeting.