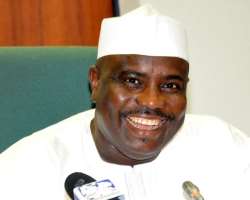 
It was a mixed fortune for the 2014 approrpriation bill in the National Assembly Tueasday as the bill sailed through the crucial second reading on the Senate after four days of intense debate.

But it was not equally lucky in the House of Representatives where a  debate on the draft law was brought to a halt after two members presented opposing views on its consideration.

Following the development,  the Speaker of the House, Aminu Tambuwal, set up a 6-man committee to look into the views and present a position to guide the House.

The House adjourned plenary Tuesday to allow its All Progressives Congress (APC) members to attend the flag-off of the party’s nationwide registration, which kicks off today

The second reading of the budget in the Senate  is perhaps an indication that the APC caucus in upper chamber  did not heed the directive of the party to block all executive bills.

Deputy Senate President, Ike Ekweremadu, who presided over plenary on Tuesday, commended the lawmakers for allowing the budget to go through second reading.

The bill has been forwarded to the Senate Committees on Appropriation and Finance, for further legislative work and the joint committee has three weeks to conclude its work and report back to the Senate.

A sign that the bill, seeking for an Act to authorise the issue from the Consolidated Revenue Fund of the federation the total sum of N4.64 trillion, would not scale through second reading appeared as Emmanuel Jime (APC,Benue) raised a point of order that discussing the document would breach the provisions of the Fiscal Responsibility Act (FRA) (2007), which stipulates that the budget must be presented to the House in toto and not a summary as was done by the Coordinating Minister of the Economy (CME) and Finance Minister, Dr Ngozi Okonjo-Iweala.

It was learnt that the APC leadership had at a meeting in Abuja on Monday night had told its  lawmakers the House of Representatives in Nigeria to ensure that they win the battle for supremacy between their party and the Peoples Democratic Party (PDP) in the National Assembly.

The leaders, it was further learnt, urged the lawmakers not relent in the pursuit to take over the leadership of the House of Representative.

At the meeting held at the National Assembly, the state governors and party chieftains saluted the courage and determination of the lawmakers and encouraged them to continue to demonstrate the ideology of the party.

The meeting was the first between the APC caucus in the House of Representatives and the party leadership since the defections.

It is coming at a time when it appears the party may be winning more lawmakers to its camp in the National Assembly, as some 11 PDP Senators have sent a letter to the Senate President, David Mark, indicating intentions to defect.

The governors of the party also encouraged the lawmakers to make sure they stand on the side of history.

The opposition party also reiterated its readiness to commence the registration of members across the country on Wednesday, a process it says will mark the beginning of its drive to bring change to the country.

Not less than 30 lawmakers in the House of Representatives have defected to the APC.