Yvonne Nelson: Will John Dumelo Continue From Where Iyanya Stopped? 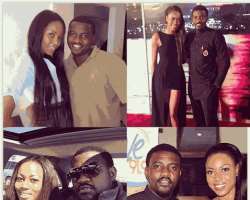 Ghanaian actress, Yvonne Nelson is no doubt one of the sexiest stars in the 'Gold Coast' country. She is one lady that can make a man do anything just to get her.

No wonder Iyanya went as far as doing a song for her in order to allegedly have a taste of her waist and trust the 'sharp Naija guy', he allegedly 'chop and clean mouth'.

After the exit, the actress was bitter. Yvonne even ranted on twitter lamenting that while she was hoping to get more from her romance with Iyanya, the 'Kukere' master was after a 'Kele Kele' affair with her.

Since their bitter romantic ending, Yvonne seems to have not seen a man to give her a 'John Thomas'. As Valentine's day draws nearer, Yvonne may be planning to spend the day with an 'Adam'.

She recently posted on the internet asking her Ghanaian brother if they could make the day memorable since they are both free.

Well, fans are hoping 'brother John' will have compassion on Yvonne and continue from where Iyanya stopped. After all, 'one man's waste is another man's raw material'.