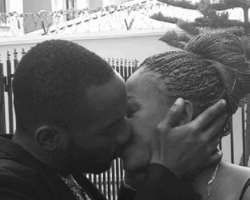 The Liberian girlfriend of K-Switch, Meenakshi Subramani, is reportedly pregnant. K-Switch is the younger of popular music star, D'Banj.

Few days ago, it was reported that K-Switch and Meenakshi Subramani are in a sizzling romance. They both clocked one together some days ago, which was celebrated by the pretty 'Liberian Girl'. Read It HERE

Latest reports making the round is that the former Liberian beauty queen is expecting a baby for the Ogun State-born singer.

Musically, K-Switch has not been able to impress some Nigerians, even though they don't expect him to easily surpass the success of his elder brother, D'Banj, who is one of the most successful artistes in Africa.