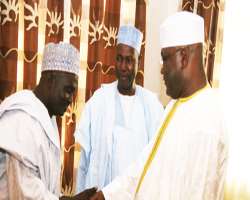 After rounds of consultations with his supporters nationwide, former Vice-President Atiku Abubakar Sunday announced his resignation from the Peoples Democratic Party (PDP).

Atiku, a foundation member of the party in 1998, will be joining the All Progressives Congress (APC), whose leadership had last December asked him to become its member.

His resignation from the PDP, which has been hit by a gale of defections since last year, marks the second time Atiku would be quitting the party on whose platform he was twice elected vice-president between 1999 and 2007.

Atiku, in the wake of his face-off with former President Olusegun Obasanjo during their second term in office, was forced to quit PDP in 2006 after the party, at the behest of the then president, had tried to frustrate him from actualising his presidential ambition.

The spate of defections in the ruling party has continued to generate disquiet in the Senate, where its leadership is engaged in a battle of wits with some PDP senators who have written to announce that they are joining APC.

One of the defecting senators, Dr. Bukola Saraki, said yesterday that last week's failure by the Senate leadership to read their defection letter, as expected, would not stop them from rescinding their decision.

The senators also got the backing of their new party, which faulted the claim of the Senate leadership that it was reluctant to read the defection letter because of a court order suspending the defection of any lawmaker in the National Assembly during the pendency of a suit seeking to stop some PDP lawmakers from abandoning the party for APC.

Announcing his resignation from PDP, Atiku, in a statement yesterday, called on his associates and friends to also join APC.

In the statement titled, “After Consultations, It is Time to Move to APC”, the former vice-president said: “Let the bridge building continue.”

“Following this extensive consultative process, I have, therefore, decided to cast my lot with the APC, a party of change committed to the improvement of the lives of our people and to the continued existence and development of Nigeria as one indivisible country. My resignation letter as a member of the PDP will be delivered to the party tomorrow (today).

“This is the right decision. As in 2006, it is the struggle for democracy and constitutionalism and service to my country and my people that are driving my choice and decision. Let me emphasise that this is not about me. We have to have a country before people can aspire to lead it, but as it is today, we may be losing this country. That is not acceptable.

“I encourage my political associates and friends to register and join the APC once the registration exercise commences, so that together we can change this country for the better.

“The process of building a nation, of securing and deepening democracy, is indeed difficult. And it is not a lineal process. There would be alignment and realignment of political forces. There would be ups and downs and zig-zags, triumphs and challenges. Amidst all that, patriots must remain focused and do what has to be done to save and build the country and serve our people better,” he said.

Recalling why he had to resign from a party he teamed up with others to found for the second time in his political career, Atiku said: “In 2006, as a result of my firm stand in defence of our constitution and our democracy, my supporters and I were pushed out of our party, the Peoples Democratic Party, a party that we worked tirelessly with other compatriots to build as a vehicle to restore democracy to our country.

“We later returned to that party in 2009 when a new leadership of the party and the country promised a new direction, a direction of inclusiveness, of internal democracy, of an end to impunity, adherence to the rule of law and respect for the dignity of members and Nigerians.

“Sadly, however, those promises have not been kept. In addition, the PDP continues to be beset with many crises, mostly leadership-induced crises. It has since lost touch with Nigerians and efforts made by many well-meaning members and stakeholders to bring it back to the vision of the founders have been rebuffed.

“To demonstrate the seriousness of the challenges and bring public attention to it, I and some other leaders and stakeholders staged a walkout during the party's last convention in Abuja.

“As I speak, most of the issues that led to that walkout are yet to be addressed. Many founding members of the PDP, I included, continue to be marginalised and excluded from the affairs of the party.

“For instance, as a former vice-president, I am by virtue of the PDP Constitution, a member of the party's Board of Trustees and its National Executive Committee.

“However, I am not invited to the meetings of those organs nor consulted on their decisions, apparently because I dared to exercise my right to contest in the party's primary election for a chance to be its flag bearer in the 2011 elections.

“We have, therefore, concluded that that party cannot be redeemed. In short, the PDP has abandoned Nigerians, the very people who gave it life and many electoral victories.

“More worrisome though is the danger posed to the continued existence of this country by this culture of impunity and arbitrariness. We continue to have threats from officially protected political extremists. Increasingly our people are recklessly being divided along the lines of religion, ethnicity and region for political gains.

“Our history and that of many other countries in Africa and Eastern Europe ought to teach us that this is very dangerous and must stop.

“We can and we must do better. Our people deserve better. It is against this background that we should understand the visit by the leaders of the APC and their invitation to me to join hands with them to save the country.

“Consequently, I have been consulting my supporters and associates, my family and friends for the past few weeks. My decision may not satisfy some of my friends and associates. In the end, however, I have to put the interest of our country first.

“This country has done so much for me personally and it deserves all that we can do to help rebuild it and serve our people better.”

Also, on a day Atiku announced his defection to APC, Saraki defended his decision and that of 10 other senators to join the party, adding that the refusal of the Senate leadership to read their defection letter would not make them rethink their choice.

He informed THISDAY that he and his colleagues who had defected to APC were not worried whether the letter was read on the floor of the Senate or not, because it was already in the votes and proceedings of the Senate that they had defected from PDP.

He said: “Whether the Senate leadership reads our letter of defection or not, we are not worried because it is already contained in the Votes and Proceedings of the Senate.

“Whether the letter is read or not, it would by no means affect our decision to defect to the APC. We have defected and that is the position.”

The APC also said there was no court order barring the 11 senators from defecting to the party.

While reacting to the delay by the Senate leadership to read the senators' defection letter on the floor of the Senate, APC said any attempt to link it with a court order was mere misinformation.

In a statement yesterday by its interim National Publicity Secretary, Alhaji Lai Mohammed, the party said the existing court order was that the Senate President and the Speaker of the House of Representatives should maintain the status quo concerning defecting lawmakers.

“What this order means is that neither the President of the Senate nor the Speaker of the House can declare vacant the seats of the defecting lawmakers. It does not mean the letter of notification from defecting members cannot be read on the floor of the chambers,” it said.

According to the party, in view of this, the argument that the defection letter cannot be read on the floor, so as not to contravene the Senate's Standing Rules that precludes the upper chamber from discussing any matter that is already in court, does not apply in this case.

“We are not asking that the issue of the defection should be discussed or debated on the floor of the Senate. All we are saying is that the senate president should read the letter of notification. The coast is very clear for this to be done, and the Ssnate president is duty bound to do so,” the party added.

It also explained that if the aim of the tactic being employed by the Senate leadership was to stop the 11 senators from defecting, it would fail.

“Therefore, trying to stall the defection by stonewalling on the letter or attempting to secure a dubious injunction, especially when our lawyers were not served the motion papers until about 4 pm of the same Wednesday, is like seeking to abort a pregnancy when the baby has already been born,” the party said.

A Senior Advocate of Nigeria, Chief Adegboyega Awomolo, also backed the position of the party on the defection of the senators.

According to him, the senate president does not have the power to declare the seat of a senator vacant without first obtaining an order from a competent court.

He said the certificate of return issued by the Independent National Electoral Commission (INEC) entitled a senator to be in office for four years, unless he/she is removed by a court or tribunal lawfully constituted, resigns, dies or is otherwise removed under Section 68 of the 1999 Constitution.

• He has no constitutional or statutory powers to revoke, annul or withdraw the certificate of return issued by INEC to any senator.

• He cannot discard, annul or disregard the electoral mandate given to a senator like him, which is given by the electorate of the affected senatorial district.

• The constitutional role, duties and powers given under Section 53 or any other provision of the constitution does not extend to the determination of validity, lawfulness or whether a senator has ceased to be a member of the Senate.”

Awomolo explained that since the senate president was not the appointing authority, he could not exercise powers to terminate the tenure of a senator.